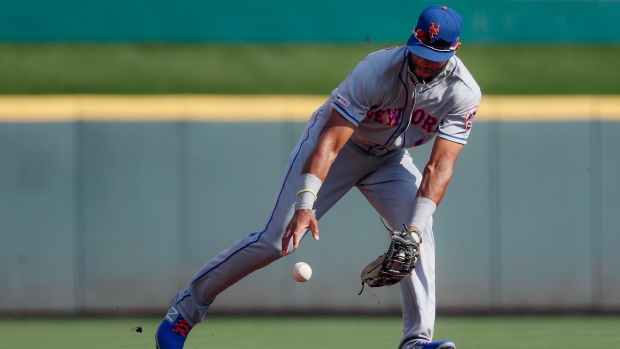 He should know. He made it.

The third baseman hesitated on what he thought might be a foul ball, allowing Aristides Aquino to beat out a bases-loaded infield hit that drove in the Cincinnati Reds' first run in the New York Mets' critical 3-2 loss on Saturday.

"That was a bonehead mistake," said Frazier, a former Red. "I thought it was foul. I remember doing that once when I was younger and telling myself, 'Always play it through.' That cost us one and maybe two runs. That's on me."

"That one hurts," Mets manager Mickey Callaway said. "We had multiple chances."

Cincinnati took a 2-0 lead in the first against Zack Wheeler on RBI infield singles by José Iglesias and Aristides Aquino. After a leadoff single and a walk, Frazier allowed Eugenio Suárez's potential double-play grounder to bounce off his glove for an error, loading the bases with no outs.

Aquino followed with his chopper, a ball that appeared to be foul but was ruled fair by third base umpire Mark Ripperger. One out later, Iglesias singled to drive in the second run.

Wheeler hit an RBI grounder in the third after Frazier's double off the centre-field wall, and the Mets tied the score in the fourth when Brandon Nimmo allowed Anthony DeSclafani's pitch to hit the protective gear on his right arm.

With the score 2-2, Justin Wilson (4-2) walked Iglesias with one out in the eighth and José Peraza blooped a single to right. Seth Lugo relieved and struck out pinch-hitter Curt Casali, and Colón grounded a curveball up the middle.

"The Mets gave me a chance after I left Atlanta," said Colón, a former Met. "Those guys over there probably hate me now, but I have a lot of love for those guys. It comes full circle."

Joel Kuhnel (1-0), a 24-year-old right-hander who made his big league debut last month, got the final out of the eighth for his first major league win. Raisel Iglesias struck out Robinson Canó, Wilson Ramos and Michael Conforto in order for his 34th save in 39 chances.

A day after hitting his 50th homer, Mets rookie Pete Alonso went 0 for 4 and stranded the bases loaded in the fifth when he struck out, right after Jeff McNeil took a called third strike. McNeil and Nimmo also struck out in the third, stranding a runner on third base,

Wheeler, eligible for free agency after the World Series, allowed one earned run in seven innings for the third straight start, the last two without a decision. He gave up seven hits.

A group of Mets fans in the left field corner of the field level seats wore blue T-shirts with "Queens City" written in orange on the chest. Cincinnati's nickname is "The Queen City."

Amir Garrett was hit on a foot by Jeff McNeil's sharp one-hopper with one out in the eighth inning. Garrett recovered in time to throw out McNeil, then was removed after a visit from Bell and a trainer. After acting like he needed support to get off the field, Garrett smiled at teammates on the bench and sprinted to the dugout.

Mets: 1B Dominic Smith will rejoin the team in New York on Monday and is available to be activated if needed. Smith has been out since July 27 with a stress reaction in his left foot.

Reds: OF Nick Senzel will have surgery next week to repair the torn labrum in his right shoulder. Manager David Bell is confident Senzel will be ready for opening day. ... Brian O'Grady left after three innings after being shaken up while banging into the centre field fence trying to track down Amed Rosario's third-inning double.

Mets: RHP Marcus Stroman (9-13) was moved up a day and will start Sunday because manager Mickey Callaway thinks he matches up better against the Reds than Miami. LHP Steven Matz will start the series opener against the Marlins.

Reds: RHP Trevor Bauer (11-12) will make his first career start against the Mets. Bauer's eight innings in 3-1 win at Arizona on Sunday were the most his nine starts for Cincinnati.