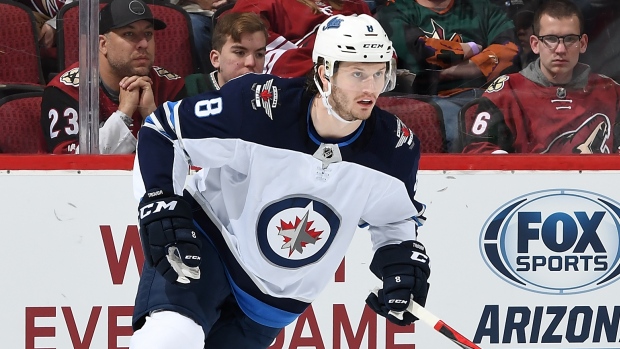 The New York Rangers sped up their rebuilding effort Monday by acquiring offensive-minded defenceman Jacob Trouba from the Winnipeg Jets.

New York sent young defenceman Neal Pionk and the 20th overall pick in the draft to Winnipeg for Trouba. The 25-year-old gives the rebuilding Rangers a legitimate top-pairing blue liner to help their climb back toward being playoff contenders.

"When we're out there trying to improve the team, we're looking for players that will fit into what we're doing," Rangers general manager Jeff Gorton said on a conference call Monday night. "Does it accelerate it? We'll see. But we're certainly getting a really good player that we've coveted for a while. It fits with what we're doing, and we'll see where it takes us."

Trouba is a restricted free agent who needs a new contract, which shouldn't be a problem for the Rangers. Gorton and agent Kurt Overhardt spoke after the trade and agreed to talk later this week.

"I have an idea of what I think it will take," Gorton said of signing Trouba. "We move forward with complete confidence that we can get a deal done."

The Jets didn't have that confidence or the desire to sign Trouba long term. So they listened to offers around the league and opted to take this one from the Rangers before the draft this weekend.

"We just felt it was best to open up the door to the possibility of trading him," Winnipeg general manager Kevin Cheveldayoff said. "He's someone we saw grow and develop. He's played hard for our organization for a period of six years."

Trouba has 179 points in 408 regular-season NHL games. Last season, the right-handed shooter had eight goals and 42 assists for 50 points and averaged just under 23 minutes a game.

He'll probably play more than that for the Rangers.

"He's a big defenceman, he's 25 years old, he can play against the best players, he can provide offence," Gorton said. "He's going to come here and he's going to play big minutes. He's very versatile. We can envision him playing in all scenarios and being a big part of it."

Trouba was a big part of the Jets making the playoffs three of the past five seasons but was never going to surpass Dustin Byfuglien on the depth chart. There's no one in front of him on the right side on defence in New York.

Winnipeg still needs to get new contracts done for star wingers Patrik Laine and Kyle Connor and not a whole lot of salary-cap space to operate with. Cheveldayoff acknowledged, "there's realities in hard cap world" the Jets must manage.

"We still got lots of moving parts or balls in the air, so to speak," Cheveldayoff said. "There's no question we have a challenging summer still ahead of us."

The Rangers' summer should be more about adding, given their heavy quantity of salary-cap space. They'll spend more on Trouba than Pionk, who's also a restricted free agent, but can continue to be active in trade talks and free agency.

Pionk, 23, had six goals and 20 assists last season with New York in his second NHL season. The Jets will be counting on Pionk to fill a void after trading Trouba and likely losing defenceman Tyler Myers in free agency.

"He's a young player that we believe has upside that is going to continue to grow," Cheveldayoff said. "He's someone that we think, given the group of players that we have in our organization from our forward standpoint, that he's going to complement very, very well."

The 20th overall pick was originally the Jets' pick they sent to the Rangers at the trade deadline for centre Kevin Hayes. Winnipeg traded Hayes' negotiating rights to Philadelphia for a fifth-round pick.