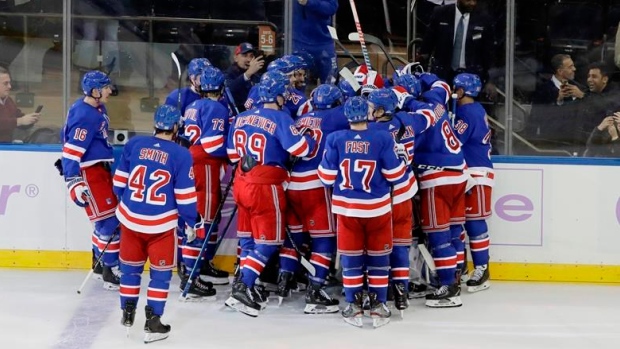 Tony DeAngelo scored 32 seconds into overtime to give the New York Rangers a 3-2 victory over the Minnesota Wild that moved Lundqvist into sole possession of fifth place on the NHL’s career wins list Monday.

Lundqvist made 26 saves for his 455th victory, breaking a tie with Curtis Joseph.

"It's a cool thing and I'm proud of it,'' Lundqvist said. “I am grateful for all the teammates who helped get me here."

Chris Kreider tied it for the Rangers on a power-play goal with less than three minutes left in the third period. Brady Skjei scored early and Artemi Panarin had three assists, giving him at least one point in all 11 games New York has won this season.

“It was a good night, for sure,” Lundqvist said. “I liked the way we played tonight. We kept pushing. We didn’t give up. It’s a great sign for our group.”

Zach Parise and Ryan Donato scored for the Wild, who are 3-0-3 in their last six games.

The 5-foot-8 Zuccarello, one of Lundqvist’s best friends and a fan favourite during nine seasons with the Rangers, was back to play at The Garden for the first time since New York traded him to Dallas at the deadline last February.

Minnesota’s new left wing was showered with cheers and choruses of “Zooook!” as he hopped onto the ice, waved to the crowd and patted his chest to acknowledge a video tribute during the first period.

“It was emotional for sure, leading up to the game. It was really nice — a good moment for me,’’ Zuccarello said. “I had to fight back some tears. It was a really nice moment for me and for my family.”

With the teams skating 3-on-3 in overtime, DeAngelo moved in from the blue line and snapped the puck past Minnesota netminder Alex Stalock. Ryan Strome and Panarin assisted on the play.

“It was good to get some open space and finish it off,’’ DeAngelo said.

Donato put the Wild ahead 2-1 with his second goal of the season at the 10-minute mark of the third. After a turnover by Rangers forward Pavel Buchnevich in the neutral zone, Donato eluded a sliding Skjei before snapping a high shot past Lundqvist.

Kreider tied it at 17:10 of the third when he tapped a rebound past Stalock. Strome and Panarin assisted on Kreider’s sixth of the season.

“You can’t take a penalty every game in the last five minutes,’’ Wild coach Bruce Boudreau. “You give them a great opportunity to score and they do it.”

The inconsistent Rangers were coming off a frenetic 6-5 comeback win at Montreal on Saturday after a lacklustre 4-1 loss at Ottawa the night before. Their previous home game was a 4-1 victory over Eastern Conference-leading Washington last Wednesday.

“We knew this would be a hard game,’’ Rangers coach David Quinn said. “We got the power-play goal and made a great play in overtime.”

Skjei opened the scoring at 14:50 of the first when his shot from inside the blue line eluded Stalock through traffic. DeAngelo and Panarin assisted on Skjei’s third of the season.

Panarin continues to pile up points for the Rangers, who signed the Russian forward to an $81.5 million, seven-year contract in July. Panarin has points in 14 of the last 15 games and leads New York with 30 overall — 12 goals and 18 assists.

New York outshot the Wild 10-2 in the second but Minnesota managed the only goal when Parise tied it 1-all at 17:11 with his ninth of the season. Kevin Fiala and Jared Spurgeon assisted.

The shaggy-haired Zuccarello faced the Rangers for the first time since his trade to Dallas. The 32-year-old Norwegian subsequently signed a five-year contract with the Wild in July. He had 352 points (113 goals, 239 assists) in 509 games with the Rangers and led the team in scoring four times. Each time he touched the puck, there were choruses of “Zooook!”

"When you start closing in on 10 years together, you experience so much together. That's why it's special seeing each other like that,'' Lundqvist said. "What I loved most of his game here is that he's very passionate. He competes 100 per cent every night."

Zuccarello, who had said he was hoping to celebrate a goal against his pal Lundqvist, was buzzing early in front of the New York net with linemates Jason Zucker and Eric Staal.

Late in the third, Zuccarello made a slick pass to Zucker, who raced down right wing on Lundqvist on a 2-on-1, only to be denied by a vintage glove save from the Swedish netminder.

Lundqvist has made 999 career appearances (regular season and playoffs combined) with the Rangers. He is one short of becoming the sixth player to play in at least 1,000 games for the team.

NOTES: Wild goalie Devan Dubnyk missed his fourth consecutive game because of a family issue. ... The Rangers dressed centre Boo Nieves, who was recalled from Hartford of the AHL to replace injured centre Greg McKegg. … Rangers centre Mika Zibanejad missed his 13th straight game with an upper body injury. The team hopes he will be in the lineup Wednesday against Carolina. … The Rangers were also missing injured defenceman Marc Staal. … The Wild scratched forward Nick Foligno and defenceman Nick Seeler. … The teams meet again Feb. 13 in Minnesota.

Wild: At the New Jersey Devils on Tuesday.