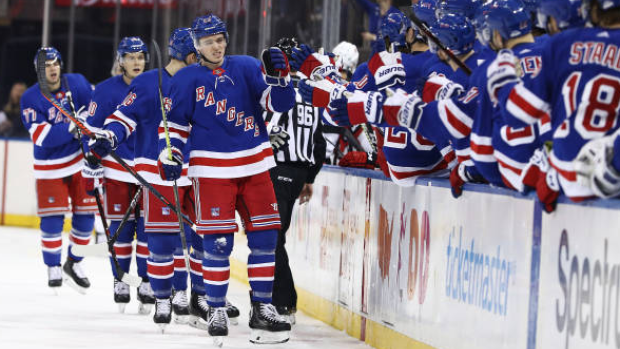 Ryan Strome has been traded twice in the past three years and he's hoping to avoid the hat trick with the New York Rangers.

Strome, who has 12 goals and a career-high 43 points in 48 games this season, told the New York Post he's hoping to remain with the Rangers through next month's trade deadline.

"I’ve been traded twice now. The third time wouldn’t be anything that I’m not used to. I love it here, though. I really hope I stay," Strome said. "I feel like I’ve lived in New York for so long, it’s my second home. The coaching staff and the management here, I think I’ve found a little bit of a home. Whatever happens, happens. It’s a business, but I think you just take everything in stride as an athlete."

The 24-year-old was traded to the Rangers in November of 2018 for Ryan Spooner after posting just one goal and two points in his first 18 games of the season with the Edmonton Oilers. Upon joining the Rangers, he scored 18 goals and added 15 assists in 63 games.

He admitted to the Post, though, that the trade to New York hit him harder than when he was moved to the Oilers from the New York Islanders for Jordan Eberle in 2017.

"The second one was definitely harder. When I got traded from the Islanders, it was in the summer, which is a little bit easier," Strome explained. "I was excited for a new start, but when I got traded from Edmonton, I was really disappointed. I felt like I was a big part of their locker room there and unfortunately just didn’t have a great start to the season.

"But for the first 24 hours, it felt like my heart kind of got ripped out of my chest until I got here, and I saw the opportunity I was gonna get, and back in New York where I was familiar with, and a franchise that treats players unbelievably, so those feelings went away pretty quick, but the initial shock was tough especially for my wife, she just got a job promotion in Edmonton, she had her own network of friends and I kind of felt bad for her, too."

Strome is scheduled to become a restricted free agent this season as he plays out the final season of a two-year, $6.2 million contract signed with the Oilers in 2018. He said Thursday he's hoping to sign an extension in the Big Apple.

"I love it," Strome said of playing in New York. "I just think people care. It’s not Canada where things are completely overblown. There’s not really much else to do in Edmonton, so hockey’s the main focus. New York, people definitely care about the team, but at the same time, there’s so much to do, so much going on that you can kind of escape a little bit. People love the Rangers, but you’re also not walking down the street signing autographs for people, if you know what I mean. You’re able to hide as much as you want to."

At the All-Star break, the Rangers sit 11 points back of the Carolina Hurricanes for final wild-card spot in the Eastern Conference.