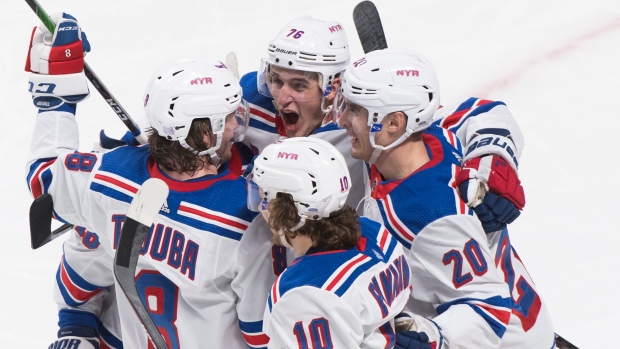 The Canadiens blew a four-goal lead and the New York Rangers stormed all the way back to win 6-5 on Saturday night. Montreal led 4-0 early in the second period and 5-3 in the third.

"In this league, when you have a team down like that, you gotta, I don't want to say it, but step on their throats," said Domi, who scored twice in the first period. "That's the analogy we use. Put them out of it completely. And we weren't able to do that tonight.

"That can't happen. We know that within our locker room."

The Rangers (10-9-2) put three unanswered goals past Carey Price in the third period to complete the improbable comeback as Montreal (11-7-5) extended its season-long slump to four games.

"We had a huge lead and we let that go, there aren't too many positives in that," said winger Nick Suzuki, who had two assists. "It's just unacceptable for all of us. Wins are so important in this league."

Artemi Panarin scored at 5:51 of the third on a no-look backhand pass from Chris Kreider before Brendan Lemieux tied the game at 5-5 — his second of the night — with a short-handed marker at 8:40 on a 2-on-1.

Defenceman Jacob Trouba scored the go-ahead goal with a shot from the point that went off Jeff Petry and in with 7:50 left in the game.

The stunned Canadiens lost in regulation for the first time this season when leading after the first period (6-1-1).

"We have to tighten up defensively," said coach Claude Julien. "We're not tough enough, we're not tracking pucks. Our back-check was not good at all tonight. We played against a hungry team, even though they played last night. That's another reason why this is unacceptable. We should have been starving too."

Rangers backup goalie Alexander Georgiev was shaky in the first period but he stopped 38-of-43 shots on the night for his fifth win of the year.

Domi and Artturi Lehkonen each scored twice and captain Shea Weber added another for Montreal. Price stopped 28-of-34 shots in defeat.

The well-rested Canadiens were cruising to victory with a 4-0 lead after 23 minutes against a Rangers team that lost 4-1 in Ottawa on Friday.

Domi, back at centre after playing the last three games on the wing, snapped a nine-game goalless drought 2:03 into the encounter from the edge of the crease.

Montreal went up 2-0 exactly halfway through the first when Lehkonen fired a perfect shot far post on Georgiev while using Trouba as a screen.

Domi made it 3-0 with his second goal on a quick release that caught Georgiev off guard with 34 seconds left in the period.

New York's backup goalie got a piece of Weber's slap shot at 2:51 of the second but the puck still trickled in behind him.

"We just never stopped. I couldn't be prouder of these guys the way they competed from the drop of the puck to the horn blowing at the end."

New York put three pucks past Price in a 3:20 span in the second.

An unmarked Filip Chytil scored the first for the visitors with a one-timer at 6:10 on a pass from Panarin.

Pavel Buchnevich, playing his 200th NHL game, made it 4-2 at 7:06 when his shot went off defenceman Cale Fleury and in for his fourth of the year.

Lemieux got the Rangers within one at 9:30 by deflecting Adam Fox's shot past Price as a penalty to Phillip Danault expired.

Notes: Panarin has at least a point in 13 of his last 14 contests. … It was the first of three meetings between New York and Montreal this season.

This report by The Canadian Press was first published Nov. 23, 2019.