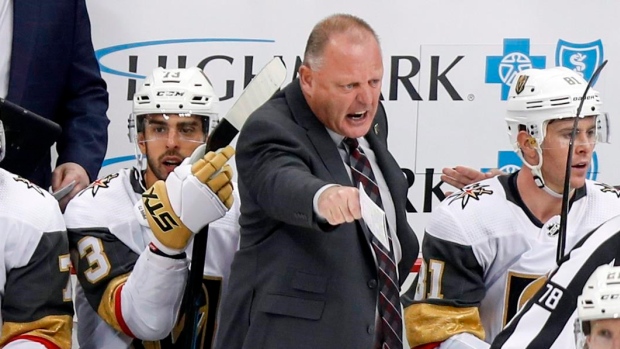 What better place for a comeback than Broadway?

Gerard Gallant is set to return to the NHL head coaching ranks behind the bench of the New York Rangers, TSN Hockey Insider Pierre LeBrun confirmed.

LeBrun notes the contract is expected to be for four years and worth around $3.5 million per season.

Gerard Gallant's four-year contract with the New York Rangers believed to be worth around $3.5 million a year.@TSNHockey @TheAthletic

The move comes a month from the day that the team received permission from the Vegas Golden Knights to interview their former bench boss.

Gallant took the Golden Knights to the Stanley Cup Final in the franchise's inaugural season and won the Jack Adams Award as the league's top coach in 2018. He had a 24-19-6 record last season when he was fired, leaving Vegas with a record of 118-75-20 behind the bench.

The 57-year-old has a career record of 270-216-4-51 in 541 career games as a head coach with the Columbus Blue Jackets, Florida Panthers and Golden Knights.

On the international stage, Gallant is fresh off of leading Canada to gold-medal triumph at the IIHF World Championship earlier this month in Liga.

The native of Summerside, PEI had previously served as assistant coach with Team Canada at the IIHF World Championship in 2007 and 2017, winning gold and silver.