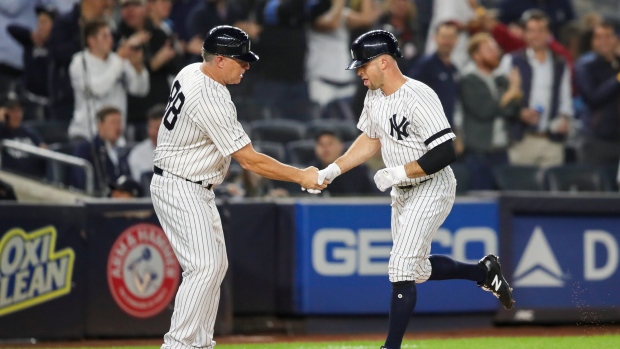 A day after wasting a chance to clinch first place, the homer-happy Yankees went ahead when LeMahieu hit a three-run drive in the second inning and breezed to their 100th win.

Gardner added a solo shot in the fourth and then hit a two-run double in the sixth. Cameron Maybin and Clint Frazier homered for good measure in the eighth, and Aroldis Chapman struck out Albert Pujols to end it.

Despite putting 30 players on the injured list this season, New York (100-54) wrapped up first place with eight games to spare and made Aaron Boone the first manager to win 100 games in each of his first two major league seasons.

The Yankees open the playoffs on Oct. 4, likely against Minnesota, which leads the AL Central, or the wild-card winner.

Masahiro Tanaka (11-8) allowed Kole Calhoun's homer leading off the fourth. The Angels had just four hits in seven innings off Tanaka, who struck out six and walked one.

But the Yankees may go to the post-season without their winningest pitcher, Domingo Germán. The 27-year-old right-hander, who is 18-4, was placed on administrative leave under Major League Baseball's domestic violence policy earlier in the day.

New York's 19th AL East title was its first following a run of 13 in 17 years that started in Derek Jeter's rookie season.

ATLANTA (AP) — Ronald Acuña Jr. became the second-youngest player in baseball history to hit 40 homers in a season, Freddie Freeman also drove in two runs and Atlanta clinched at least a tie for first place in the NL East with a win over Philadelphia.

The Braves hold a 9 1/2-game lead over the Washington Nationals, who have played three fewer games and were off Thursday. Atlanta can officially celebrate as soon as Friday with either a victory over the San Francisco Giants or if Washington loses at Miami.

The Phillies trail Milwaukee by four games in the race for the NL's second wild-card spot.

Mark Melancon worked perfect ninth for his 11th save with Atlanta and 12th overall this season.

CHICAGO (AP) — Matt Carpenter homered in the 10th inning against Craig Kimbrel in the All-Star closer's return, and St. Louis regrouped after blowing a late lead to beat Chicago.

Emerging ace Jack Flaherty shut down Chicago over eight innings, and despite a tying three-run rally in the ninth, the Cubs dropped a game behind Milwaukee for the second NL wild card and four games behind St. Louis for first place in the NL Central.

Cubs slugger Anthony Rizzo provided a jolt in his unexpected return from a sprained right ankle, homering in the third inning to tie the game at 1. But Flaherty was spectacular otherwise, pitching three-hit ball while allowing just the one run and striking out eight.

Carpenter homered to deep centre field off Kimbrel (0-3), who was activated from the injured list prior to the game after dealing with right elbow inflammation.

Giovanny Gallegos pitched a perfect 10th for his first save in two chances. Andrew Miller (5-5) recorded the final two outs in the ninth for the victory.

MILWAUKEE (AP) — Lorenzo Cain homered before exiting with a sore ankle, Milwaukee pitchers combined to strike out 16 and the Brewers improved their playoff position by beating San Diego.

Milwaukee moved within one game of Washington for the top NL wild-card spot. The Brewers are in the second wild-card slot and three games behind Central-leading St. Louis.

Ryan Braun put Milwaukee ahead with an RBI double in the first inning off Joey Lucchesi (10-9). The Brewers added a run in the third when Keston Huira doubled and later scored on Lucchesi's wild pitch.

Freddy Peralta (7-3) struck out three of the four batters he faced for the win. Josh Hader picked up his 34th save in 40 tries, breaking a franchise record for left-handers previously held by Dan Plesac.

The win over Kansas City kept the Twins' American League Central lead at four games — with nine games to go.

Miguel Sanó homered and hit the tiebreaking RBI double in the fifth following the ejection of Royals starter Mike Montgomery, who started that inning by giving up a home run to Mitch Garver.

The Twins trimmed their magic number for clinching the division to six.

CLEVELAND (AP) — Mike Clevinger pitched six shutdown innings, Franmil Reyes homered in his return to the lineup and Cleveland moved into a tie for the second AL wild card with a win over Detroit.

The Indians defeated the Tigers for the 17th straight time this season to match a franchise record set against Baltimore in 1954. Cleveland won 18 of 19 in the season series and outscored Detroit 116-38

Starter Daniel Norris (3-13) allowed one run in three innings for the Tigers, who have the worst record in baseball at 45-107.

The shutout was the 15th by Cleveland this season, and Detroit was blanked for the 14th time.

BOSTON (AP) — Eduardo Rodriguez struck out 10 over six innings of two-hit ball, and Xander Bogaerts had a pair of RBI singles to lead Boston over San Francisco.

Brandon Workman picked up his 15th save. Rodriguez (18-6) walked two and allowed one unearned run.

Madison Bumgarner (9-9) lost in his first career start at Fenway Park, giving up five runs on nine hits and two walks in five innings while striking out seven. He allowed the first four Boston batters to reach safely and fell behind 2-1 after one inning.

The Mariners swept the three-game series between last-place teams and sent the Pirates to their sixth straight loss.

Long reached base on first baseman Jose Osuna's error to start the 11th and Omar Narvaez singled with one out to put runners on the corners. Austin Nola then hit a chopper to second baseman Kevin Kramer — rather than flip the ball to second, he ran at Narvaez, who alertly stopped and began to retreat.

Kramer then threw to first, and Narvaez was eventually tagged in a 4-3-6-2 rundown as Long scored. Kramer likely would've had no chance to throw home at the start to get Long.

Brandon Brennan (3-6) pitched one scoreless inning and rookie Erik Swanson worked around a walk in the 11th for his first career save. Clay Holmes (1-2) took the loss.

BALTIMORE (AP) — Cavan Biggio homered and had three RBIs to offset a spectacular, homer-robbing catch by Austin Hays, and Toronto used a six-run seventh inning to beat Baltimore for a three-game sweep.

Lourdes Gurriel Jr. also went deep for the Blue Jays, who earned their first sweep at Camden Yards since July 2010.

After Biggio and Gurriel homered off Gabriel Ynoa (1-9) within a span of three pitches in the fourth inning, Vladimir Guerrero Jr. sent a drive to centre. Hays ran to the warning track, leaped to reach over the 7-foot wall and snagged the ball in the middle of his glove. Upon returning to the ground, Hays pounded his chest three times in succession and yelled with delight.

Trey Mancini had four hits for the Orioles, who have lost four straight and 15 of 19.