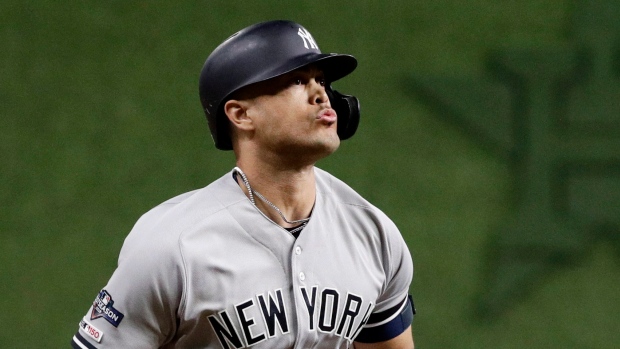 HOUSTON — Giancarlo Stanton was out of the New York Yankees' starting lineup for Game 2 of the AL Championship Series because of a right quad strain that happened before he homered in the opener against the Houston Astros.

Manager Aaron Boone said before Sunday night's game he didn't know Stanton was hurt until after the end of Game 1. Boone said the slugger was injured running out a single in the second inning. That was four innings before he hit a solo home run off Zach Greinke in New York's 7-0 victory, and the left fielder also made a nice defensive play when moving to catch a liner.

"So hoping that it's something that with today and the off day, that he would be back in play for Game 3," Boone said. "We'll just kind of see how these next 48 hours unfold."

Boone said Stanton could be a pinch-hitting option in Game 2 and could play the field in an emergency. There is a day off in the series Monday before Game 3 in New York on Tuesday night.

Stanton was limited to 18 games during the regular season because of biceps, shoulder, calf and knee injuries. A strained right knee kept him out nearly two months before coming back Sept. 18.

An MRI was done Sunday that showed a strain in the quad on the same leg.

Stanton had started the first four games for the Yankees this post-season. That included all three games in the AL Division Series against Minnesota, when he was 1 for 6 with four walks and a sacrifice fly in 11 plate appearances.

Cameron Maybin was in the lineup Sunday, batting seventh against Astros ace Justin Verlander and playing left field in place of the 2017 NL MVP. Boone went with Maybin over Aaron Hicks, who missed almost the last two months of the regular season and the AL Division Series because of a right flexor strain.

"Tough call. Obviously Verlander is a tough matchup either way," Boone said. "Just felt like with Aaron not having played obviously in a game yet, it's a tough first game back draw."