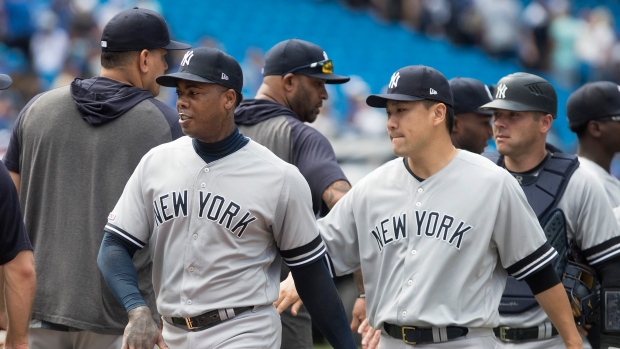 SCOTTSDALE, Ariz. — Just four years ago, Matt Blake was varsity pitching coach at Lincoln-Sudbury Regional High School, about 20 miles outside of Boston. Next spring, the 34-year-old will be guiding the high-priced arms of the New York Yankees.

"The biggest thing is just finding out where the player is at and what it is that makes him tick," Blake said Thursday after his hiring as Yankees pitching coach was formally announced. "Across different ages or nationalities and cultures, you got to get to the root of what is it that they are seeking for help and then bring it to the edge of their learning zone, if you will."

Blake replaced Larry Rothschild, who was fired after nine seasons and got hired as pitching coach of the San Diego Padres.

A 2007 graduate of Holy Cross, where he pitched, Blake started coaching at the youth level while working alongside his father.

"Just to give back because he coached me when I was younger, so it's kind of interesting jumping off point as a favour to the community, essentially," Blake said. "And then I kind of realized there was a passion for helping the players."

At first, he needed to adjust and realize "they are not the accomplished players at 11, 12, 13," Then he moved on to high school baseball and private coaching of ages 10 up to 30.

In 2009 he became pitching co-ordinator at Cressey Sports Performance, which has worked with big leaguers such as Corey Kluber and Noah Syndergaard. Blake coached at Lincoln-Sudbury from 2009-15, worked with the Yarmouth-Dennis Red Sox in the Cape Cod League that summer, and was hired by the Cleveland Indians in 2016 as pitching co-ordinator in the low minor leagues. The Indians promoted him to assistant director of player development in November 2016 and to director of pitching development on Nov. 5.

Yankees general manager Brian Cashman hired Sam Briend of Driveline Baseball in Kent, Washington, last June as director of pitching, signalling a move to increased reliance on analytics, which Blake will break down for the big league pitching staff. Cashman said he made the hire "so we can be fully transformative from top to the bottom."

"I was looking for someone that was well versed in the new world order of technology, obviously having an analytics background, as well, and obviously clearly has the ability to share that with his players," Cashman said. "I think we talked in the summertime about trying to close the gap on people with exposure to Rapsodo and TrackMan and being able to deploy that, utilize that information, and so that led us to making some changes with our pitching co-ordinators in the minor leagues and hiring Sam Briend and, obviously, same on the major league side now with the transition from Larry to Matt."

Blake hopes to work with the conditioning staff to help pitchers avoid injuries. Ace Luis Severino and reliever Dellin Betances were sidelined from spring training to September with shoulder and lat injuries.

"It's not just what are they doing on the mound or what are they doing in a throwing program — it's the whole spectrum of activities to prepare their body," he said. "The integration of rehab, strength and conditioning and nutrition and all that is going to be important to understand."

And in an age when cameras focus on pitchers and clubs are paranoid about opposition surveillance, he will co-ordinate with the video staff to head off pitch tipping as soon as it is detected — which proved key in the World Series when Washington quickly altered Stephen Strasburg's mechanics during Game 6.

"It's obviously become more of a touchpoint given where we're at in the last year or so," Blake said. "There are a lot of resources being poured into that across the league to find advantages, and in this instance I think it's on us to do our due diligence in the minor leagues and to prepare our players to understand those things so, hopefully, we are not attacking that in the first time a guy gets to the major leagues."