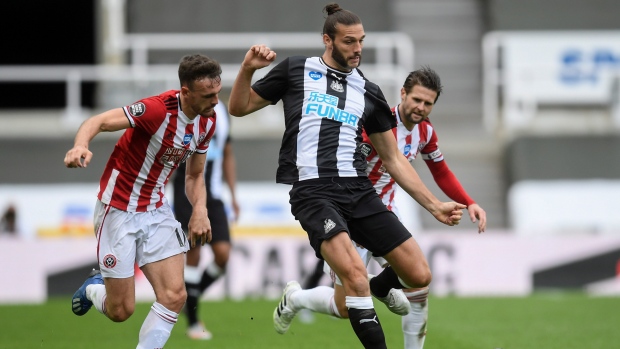 The 32-year-old former England striker's contract expired at the end of June and no new contract was forthcoming.

“I had a conversation with Andy," manager Steve Bruce said. "I think he wants to go and play. I wish the lad all the best. I hope it goes well for the rest of his career. He’s certainly been a big help to me in the last couple of years, that’s for sure."

A product of Newcastle's academy, Carroll made his pro debut with the Magpies in 2006 and spent four seasons at the club until a £35 million move to Liverpool on January transfer deadline day in 2011.

Carroll's big-money move to Anfield was not a successful one. He scored 11 goals in 58 appearances across all competitions over three seasons before moving to West Ham United, first on loan and then permanently.

Carroll spent seven seasons with the Hammers before a return to the Magpies in 2019.

Internationally, Carroll has been capped nine times by England.

Bruce also revealed that the club remains in contact with Arsenal over once again signing England under-21 midfielder Joe Willock on loan.

"As I've said, it's really Arsenal's decision," Bruce said of Willock. "And until Arsenal make a decision - a bit like all the big clubs, they have a look over pre-season and see what they're getting in and not getting in - we'll keep monitoring and badgering away."