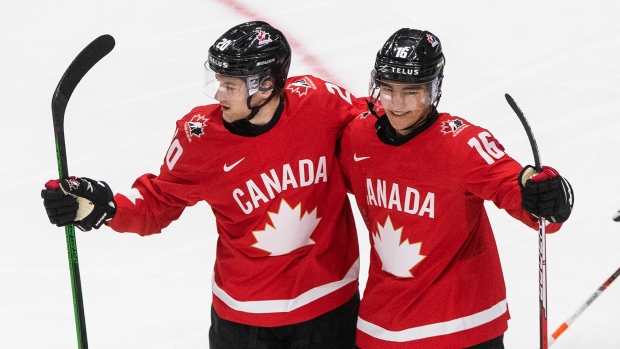 Dawson Mercer and Alex Newhook are feeling the love from back home in Newfoundland.

"It's unmatched," said Newhook, a centre from Boston College. "I don't think anywhere else in the world would have that support. Myself and Dawson, we're feeling it first hand and we're super proud to be from Newfoundland. The support we get, it's been crazy."

What was Mercer's phone looking like after he scored twice last night?

"It was blowing up, honestly," the Chicoutimi Sagueneens forward said. "I love seeing the videos of my friends and how hooked they were and everything."

Even the premier of Newfoundland and Labrador, Andrew Furey, tweeted his support, telling Mercer and Newhook, "your home province is cheering you on."

Amazing game, so proud to watch Team Canada play with strong representation from Newfoundland and Labrador. Way to go, Alex Newhook and Dawson Mercer — your home province is cheering you on! https://t.co/oaCSRlrZpg

This the first time since 1992 that two players from the province have made it to the World Juniors. Mercer and Newhook actually grew up as rivals. Mercer is a "Baymen" from tiny Bay Roberts while Newhook is a "Townie" from St. John's.

"There was always a rivalry, for sure," said Newhook. "It was always the town against the bay. We played a lot against him and that helped both of us. Usually there's not too much competition once you get older and to have a lot of great players in our age group back home has helped us both get here today."

"I only played with him when it was Team NL tournaments and a lot of time was against him," Mercer said. "It was very competitive, especially for our age group. It was, honestly, a pretty good year in Newfoundland so the competition was decent."

Who had the edge growing up?

"I remember we took it my first year of bantam before I moved away," said Newhook, who left home at age 14, "so that will probably give me bragging rights."

"Yeah, they got the best of us there," Mercer recalled with a chuckle, "but we had it the year before, though."

Newhook and Mercer may be from the same province, but they bring different elements to Team Canada. Mercer is often listed as the 13th forward and described by coach Andre Tourigny as a "flex player" who can bounce around the line-up. One of his goals last night came shorthanded.

"Every team needs a guy like that," said Newhook. "He's a guy that can be put in every situation and excel."

Meanwhile, Canada prefers to keep Newhook at centre and also feeds him some power-play time. Newhook's skill was on display on his opening goal last night as he wheeled around the German defence with some fancy footwork.

"He's a very explosive and powerful player," Mercer observed. "He showed that on his goals. You could see he really went by that defenceman with ease. He has a lot of skill and offensive ability, but he's also a big guy and hard to knock off pucks. He's a strong player and he's always been like that growing up against him."

Alex Newhook on the Avs should be super fair pic.twitter.com/EF7g81grh7

So, Newhook and Mercer are different players from different parts of Newfoundland, but in the end that shared heritage means more than anything else.

"It was a great game last night and to have us both here makes it that much more special," Newhook said.

After getting the third period off last night, Devon Levi will be back in net tonight for Canada.

"Today we will face an opponent who will bring a little more offence, so we wanted Devon to have a chance to play more minutes," Tourigny explained.

"We've all been giving it to him a bit," Newhook said with a smile. "All we can really get for him is a win so hopefully that will come through."

Levi stopped nine of 10 shots against the Germans and continues to impress his new teammates.

"He's been really composed and he plays really safe," Mercer said. "He's always in the right position and plays with confidence. He's always zoned in. He's so serious and determined in all aspects whether it's warming up or in practice. I go out there to shoot on the goalies [before practice] fairly often and he's always dialed in so I think that's something that's important."

"He's a big body," said Mercer. "He had a good team last year that had a lot of success and he was a big part of that. We will move the puck side to side and get quick shots on net."

The IIHF issued a one-game suspension to Team Canada's Braden Schneider for checking to the head and neck area. The Brandon defenceman was ejected from last night's game in the first period after catching Jan-Luca Schumacher up high.

Here's the explanation from the IIHF:

"In an attempt to gain possession of an incoming puck from his teammate, German forward Jan-Luca Schumacher slowed down and decided to chip the puck outside of his defensive zone. At no time during this sequence did Schumacher establish control of the puck. At the same time, Schneider skates towards Schumacher. Without any regard to the puck at any time and seeing his opponent in a vulnerable position, Schneider delivers a body check to the head of Schumacher. Schneider delivers the check slightly elevating his shoulder, hitting his opponent directly in the head ... while Schneider’s elbow was down and while there was a size difference between the two players – because Schneider slightly elevated his shoulder into Schumacher’s head resulting in the player’s head snapping back, Schneider actions were extremely dangerous, created a serious risk of injury to Schumacher ... Schneider could have easily avoided the check."

Tourigny was asked about the play this morning before the decision came down.

"It's a hockey play," Canada's coach said. "The size between the two players is a big factor. I won't lie, I didn't review the clip 22 times, just saw it and moved on, nothing we can do about it. We don't want, obviously, a hit to the head, but I think it was a hockey play. I don't think he meant any harm to the opponent."

Moncton's Jordan Spence, a healthy scratch against the Germans, will draw into the lineup.

Despite the 16-2 win last night, Tourigny still highlighted areas where he feels Team Canada can improve.

"We have a lot of little things, little habits from our face-off routes to our net presence to our reloading, a lot of details we need to get better at during the tournament," Tourigny said. "The spirit of the players this morning is really good. The players have good energy. I like their focus. They've stayed grounded so that's important."

Slovakia, meanwhile, is feeling confident after shutting out Switzerland 1-0 on Christmas Day.

"We battled hard for a whole 60 minutes," said coach Robert Petrovicky. "We played for each other and especially at the end of the game we blocked lots of shots. It was a team effort."

What's the key tonight against Canada?

"We got to be concentrating as soon as the puck drops, especially early in the game," he said. "The boys are ready. They're excited. They're prepared. We got to keep the spirit up and play hard for every shift."