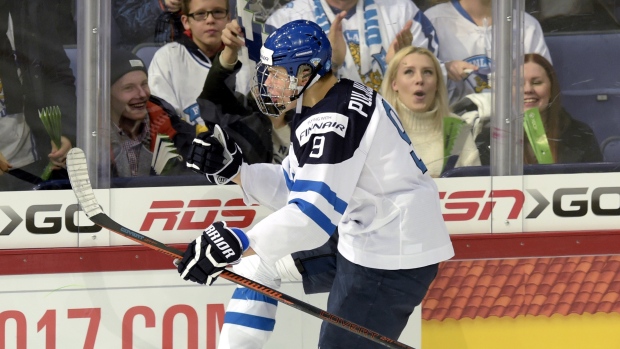 The NHL's off-season is upon us and teams are already looking to re-shape their rosters for a more successful 2016-17 season. Keep up to date on the latest trade/free agent speculation and rumours from around the league.

The Calgary Flames could emerge as the team to watch heading into Friday's NHL Draft as they attempt to move up from the sixth overall selection spot.

Bruce Garrioch of the Ottawa Sun reports Flames general manager Brad Treliving is looking to move up into the No. 3 or 4 spot in the draft to target a top-end forward such as Jesse Puljujarvi or Matthew Tkachuk. Puljujarvi was projected to be selected third overall in TSN Director of Scouting Craig Button's latest mock draft, while Tkachuk was slotted a fifth overall, between Pierre Luc-Dubois.

The Columbus Blue Jackets currently own the third selection and the Edmonton Oilers are slated to pick fourth. Garrioch reports both teams, and the Vancouver Canucks (selecting fifth), are currently listening to all offers. However, Garrioch reports it's unclear what the Flames are willing to give up to get a deal done.

While the Blue Jackets are fielding trade calls for their top draft pick, Garrioch reports the team is busy making calls of their own to try to shed salary.

The Blue Jackets have over $70 million committed to players next season and are looking to move some of their bigger cap hits. Garrioch lists defenceman Fedor Tyutin and forward Scott Hartnell as two players the team is trying to move, but adds captain Nick Foligno could also be on the table.

Tyutin owns a $4.5 million cap hit in each of the next two seasons, while Hartnell is signed through 2018-19 with a cap hit of $4.75 million. Foligno just wrapped the first season of his six-year, $33 million deal.

Who wants the hit?

When Pavel Datsyuk announced his retirement from the NHL on Saturday, he left with the Detroit Red Wings with a $7.5 million cap hit next season. Now, according to TSN Hockey Insider Bob McKenzie, the Red Wings are looking to trade Datsyuk's contract to a team who will then terminate it and take the cap hit.

The New York Islanders appear to be on the verge of losing both Frans Nielsen and Kyle Okposo when free agency opens on July 1.

Larry Brooks of the New York Post reports negotiations between Nielsen and the team are "nowhere close" to deal, while Okposo is not expected to be re-signed.

Brooks adds veteran Matt Martin is also expected to hit the open market on July 1 and could draw a contract in the area of $10 million over four years.

Rights on the move?

Steven Stamkos could be on the move before July 1.

Steve Simmons of the Toronto Sun reports "a lot of hockey people" expect Stamkos to be traded in the coming days to a team looking to negotiate a new contract with the forward ahead of July 1.

While Stamkos appears to be on his way out of Tampa, the situation he leaves is tense, according to Simmons. He notes that there is friction between general manager Steve Yzerman and head coach Jon Cooper due to the head coach's struggle to keep star players happy. Cooper was signed to an extension in December.