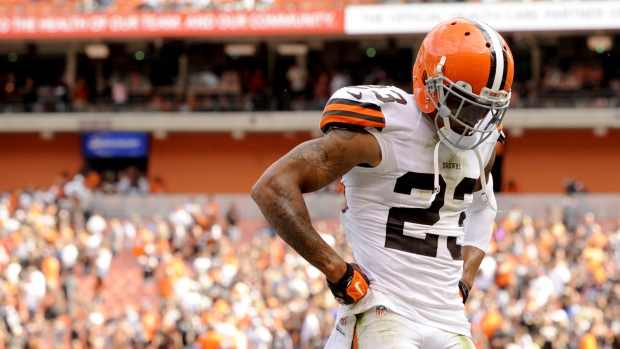 The league asked the team to submit a written explanation for Haden's surprising absence from the lineup on Sunday in San Diego after he was listed as probable on the team's injury report last week.

The Browns obliged the request on Monday, when coach Mike Pettine revealed Haden sat out with a broken finger.

Haden, arguably Cleveland's best defensive player, broke his right ring finger and injured his ribs the previous week against Oakland. Haden was limited in practice last week but was listed as "probable" — a 75 per cent chance of playing — on Friday, when he told reporters he needed to be on the field for a banged-up secondary. Cleveland was already missing starting nickel back K'Waun Williams with a concussion and safety Tashaun Gipson was questionable with a groin injury.

Browns coach Mike Pettine said Haden "covered up" his finger and went out for pregame warmups Sunday with secondary coach Aaron Glenn to see if he could play.

"We left it up to Joe, and he made the decision that he didn't want to go," said Pettine, who didn't mention the rib injury as a reason for Haden's absence.

A league spokesman said it's customary to check with teams when these instances occur. The league views the injury report as vital to maintaining its credibility and the game's integrity.

Without Haden in the lineup, Chargers quarterback Phillip Rivers passed for 358 yards and three touchdowns in a 30-27 win. Gipson also went down with ankle injury and did not return. Pettine did not have an update on Gipson's injury and said he hoped Haden might be back for this week's game in Baltimore.

"Hopefully Joe can get more comfortable with the finger injury so we can get him back out there as well," Pettine said.