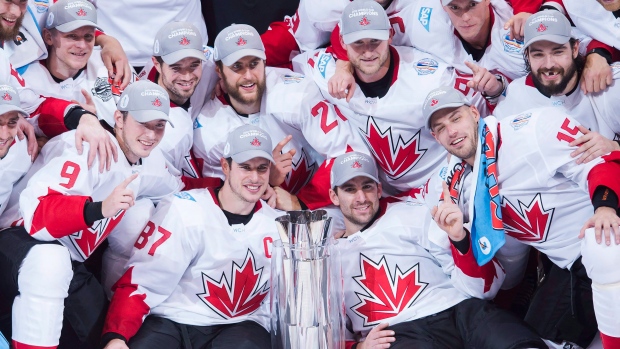 The NHL and NHL Players' Association met Thursday to discuss the planning of a 2024 World Cup of Hockey.

TSN Hockey Insider Darren Dreger notes that plans are still in the initial stages and adds the next step will be bringing the International Ice Hockey Federation into talks in the near future.

The NHL and NHLPA wrapped up their meeting on the 2024 World Cup of Hockey this morning. Planning is still in the early stages and the IIHF will need to be brought into the mix in the near future as well.

TSN Hockey Insider Pierre LeBrun reported earlier this month that the two sides had already met once on bringing back the best-on-best tournament.

"Yeah, plans are afoot. The NHL and NHLPA had a meeting last week about the next best-on-best event, the World Cup of Hockey, to be held in 2024. The two sides plan to meet again next week," LeBrun said on Insider Trading. "They also plan to bring in the IIHF and the country stakeholders in another big meeting in the next couple of months.

"Here’s the most interesting part, by far. The strongest possibility, in terms of a window to hold the World Cup in 2024, is in February, mid-way through the 2023-24 season, which is a complete departure from past World Cup and Canada Cup events that are usually held in September before the season. The NHLPA has asked the league for years to think about holding the events mid-season.

"NHL owners won't be super happy about this if it does go through. But the plan right now, the strongest option being discussed is Feb. 2024 for a World Cup of Hockey. And of course, they are also committed to the 2026 Winter Olympics in Italy."

This was the second “formal” meeting between both sides on World Cup but they’ve had an ongoing dialogue on it for quite some time now. https://t.co/KkRvw8hnGC

The NHL last held the World Cup of Hockey tournament in 2016, with Canada defeating Team Europe 2-0 in a best-of-three series to claim the title. The format, which featured an under-23 Team North America in addition to a Team Europe, was the last time many of the NHL's stars represented their countries as the league also elected not send players to 2018 Olympics in PyeongChang.

There have been three previous World Cup of Hockey tournaments, with Toronto playing host in 2016 and 2014 and Montreal and Philadelphia sharing hosting duties in 1996. Canada won each of the previous two events, while the United States won the debut tournament in 1996.