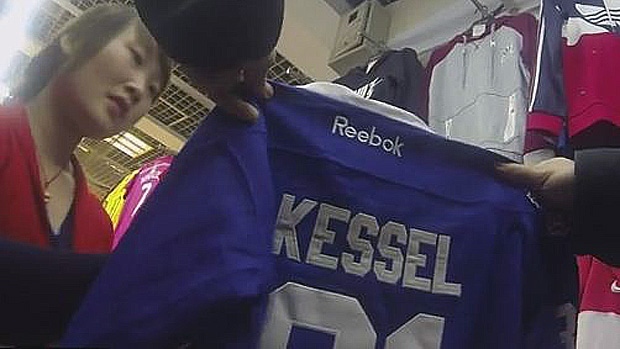 The National Hockey League, Major League Baseball and the National Basketball Association have convinced a U.S. federal court judge to close down 1,057 websites that are selling counterfeit sports jerseys and memorabilia.

As part of a Dec. 21 court ruling in U.S. federal court in Chicago, companies including MasterCard, Visa, and GoDaddy have been ordered to turn over any documents and records relating to the identities and locations of 727 named defendants.

Chinese e-commerce website Alibaba has also been ordered to turn over information about online sellers that have used its site to sell fake sports items.

The court decision came the same day Alibaba was added to the U.S Trade Representative’s list of "Notorious Markets" because of a high level of reported counterfeiting and piracy.

Alibaba said in October that it had strengthened policies against copyright infringement and had removed 380 million product listings and closed about 180,000 stores on its Taobao shopping platform in the from August of 2015 to August of 2016.

The lawsuit, filed by the NHL and other pro sports leagues, serves as a reminder of the daunting problem of knockoffs in the sports industry, a problem that’s getting worse, according to Toronto lawyer David Lipkus, who works for pro sports leagues to combat piracy.

TSN and CTV’s W5 examined the growing problem of counterfeiting in sports in a three-part series that aired in February 2015. In one factory in Shenzhen, China, an owner said he could make and deliver 5,000 fake NHL jerseys, complete with team crests, player names and numbers and shoulder patches, every month for $15.81 per jersey.

While there are 727 defendants listed in the NHL’s latest court battle against counterfeiters, the league and its co-plaintiffs concede many of those names are not legitimate.

"Defendants attempt to avoid liability by going to great lengths to conceal both their identities and the full scope and interworking of their counterfeiting operation," the NHL and others wrote in a Dec. 16 court filing.

The NHL wrote that its retail sales revenue in 2015 of NHL products was, "in the hundreds of millions of dollars."

"A significant aspect of the NHL’s business and resulting revenues has been for many years, and continues to be, the merchandizing and licensing of the NHL trademarks," the NHL wrote.

"Defendants are individuals and business entities who, upon information and belief, reside in the People’s Republic of China or other foreign jurisdictions...Tactics used by Defendants to conceal their identities and the full scope of their counterfeiting operation make it virtually impossible for Plaintiffs to learn Defendants’ true identities and the exact interworking of their massive counterfeit network."

Lipkus said leagues like the NHL are falling further behind in the battle against brand piracy.

Lipkus said counterfeiters are using websites such as Facebook and Instagram to advertise to potential customers and are registering new websites using the personal information – names, addresses and credit card data – of customers who buy their products online.

"It's getting worse as people become more comfortable shopping online and using their phones," he said. "Technology makes it so much easier. Canada just changed its laws to allow customers officers to seize containers they believe hold counterfeit items. But that’s not how business is done any more. People are buying fake items direct from factories in China and they’re being shipped directly to customers."

Still, Lipkus said it’s still worthwhile for the NHL and other leagues to pursue cases.

"The leagues don’t pay for the investigations. It’s all done on contingency," he said. "Sometimes the PayPal and Amazon accounts they seize have a few hundred dollars in them, and sometimes there’s $30,000 or $40,000 sitting there. It’s still valuable enough for the law firms that they take on the cost of the investigations and prosecutions."