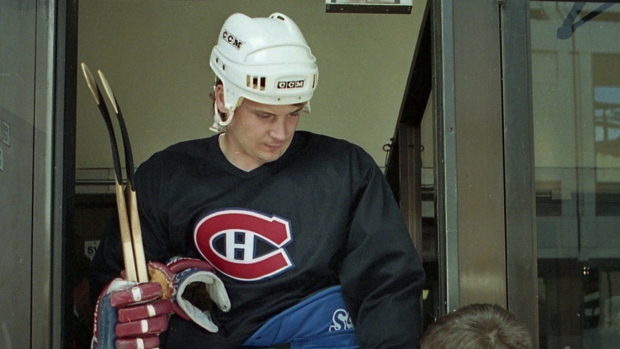 The National Hockey League is in a battle with Kelli Ewen, the widow of deceased NHL player Todd Ewen, over access to the contents of his iPhone 4 - text messages and data the NHL says may play a key role in Kelli’s lawsuit against the league.

Kelli Ewen filed a wrongful death claim against the NHL in April 2019, alleging Todd’s suicide in 2015 was linked to the league allegedly downplaying the potential long-term consequences of repeated brain trauma and profiting from a culture of violence.

Text messages on Todd Ewen’s cell phone, the NHL says, will be crucial evidence in the case and the NHL says it believes Kelli Ewen is refusing to turn over some messages.

The league’s lawyers also wrote in an Oct. 21 court filing that privacy laws should not prevent the NHL from obtaining those texts. “As a matter of law, because Mr. Ewen is deceased, he no longer has any privacy interest in the content of his phone,” the NHL’s lawyers wrote.

Todd’s case has played a key role in the debate over chronic traumatic encephalopathy (CTE) and concussions in hockey.

Todd fought his way through a dozen NHL seasons, and his wife Kelli says he battled depression, anxiety and memory loss for the last 20 years of his life.

Toronto neuropathologist Dr. Lili-Haz Hazrati declared in February, 2016 that Todd did not have CTE, prompting NHL Commissioner Gary Bettman to cite Todd’s case in correspondence with U.S. lawmakers. Bettman argued that the science over the recently-discovered brain-withering disease was inconclusive and that Todd killed himself because media hype led him to believe he must have the disease.

However, in February 2018, Boston University scientist Dr. Ann McKee announced that Dr. Hazrati had missed it and that she had actually found Stage 2 CTE in Todd’s brain.

While the Toronto researcher said she accepted those findings, the NHL has never retracted its statement about Todd, setting up a potentially high-stakes courtroom battle.

A trial in the wrongful death lawsuit which could occur as early as July 2021 is projected to take about three weeks and may feature more than 20 witnesses, including Dr. McKee, who has discovered CTE in former NHL players, including Todd.

Others who could testify are league personnel, commissioner Gary Bettman among them; NHL team personnel such as doctors and trainers who witnessed or had knowledge of specific information related to Todd’s head injuries suffered in the NHL; NHL Players’ Association personnel, Todd’s family members, and post-hockey career business colleagues.

Kelli Ewen’s attorney wrote in an Oct. 28, 2020, filing that the dispute over text messages on Todd's cellphone “is not worthy of the court’s time.”

“In December, 2019, [Kelli Ewen] voluntarily undertook the relief requested by the NHL when she engaged a forensic data extraction company, Lighthouse, to forensically examine Mr. Ewen’s cell phone and extract all text message data—including deleted messages—from Mr. Ewen’s phone,” Ewen’s lawyer wrote, adding that thousands of text messages were turned over to the NHL, “including each and every text message between Plaintiff and Mr. Ewen that existed on Mr. Ewen’s phone.”

The NHL in newly filed court documents alleges that Todd Ewen’s decision to kill himself was an “impulsive decision."

The league cited the deposition testimony of Ewen’s daughter-in-law Tracy Ficor, who said that Ewen was spreading mulch in his yard shortly before he committed suicide, and his decision to kill himself “seemed abrupt… because his hatch was open on his car, the shovel he was using, all the rake stuff was still out.”

The NHL wrote that Kelli Ewen told police officers that she and Todd had been fighting via text messages in the moments before his death. The NHL says Kelli now insists there weren’t any text messages sent that day.

“[Kelli Ewen’s] position simply is not credible, particularly because it follows months of obfuscation regarding her review and production of texts,” the NHL’s lawyers wrote. “The texts on Mr. Ewen’s phone are of critical relevance in this case. Four individuals have stated that Plaintiff told them that she was texting with Mr. Ewen immediately before his suicide. Given that Plaintiff claims that the NHL is liable for Mr. Ewen’s death, the NHL is entitled to this potentially pivotal evidence regarding the cause of Mr. Ewen’s suicide.

The texts from Mr. Ewen’s phone also are critical evidence because they provide unique insight into Mr. Ewen’s behaviour and potential motives for his suicide.”

Nearly a year later, in July 2020, the NHL expanded its demand, requesting documents “related to any actual, possible, or contemplated marital infidelity by Kelli Ewen or Todd Ewen” and “all documents related to marriage counselling provided to Kelli and Todd.”

On Aug. 28, 2020, the NHL alleged Kelli’s lawyers had not handed over any texts from the last eight days of Todd’s life.

“No messages between [Kelli] and Mr. Ewen, including texts prior to July 22, 2015, or on the date of Mr. Ewen’s death, have been withheld from the NHL,” Kelli’s attorney wrote in a court filing. “The NHL asserts that gaps and inconsistencies exist in Plaintiff’s production and accuses Plaintiff’s process for reviewing and producing texts [as being] severely flawed. The NHL is wrong.”

Ewen’s lawyers also wrote in court documents that Kelli acknowledges having an argument with her husband on the day of his suicide.

“There has been no denial that [Kelli] and Mr. Ewen argued the day of the suicide, and on other days prior,” the lawyers wrote. “Mr. Ewen’s posthumously diagnosed illness, CTE, causes a constellation of behavioral, mood, and cognitive symptoms well known to wreak havoc on the sufferer’s relationships with family and friends.”