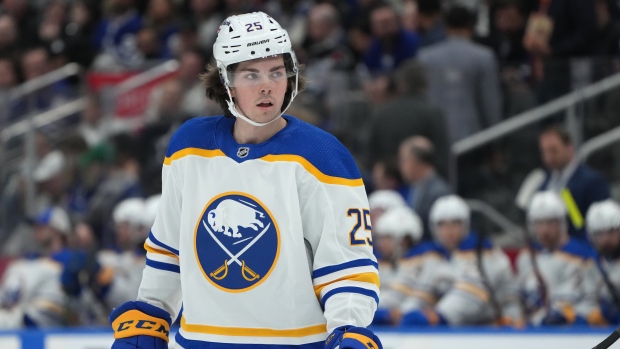 WASHINGTON (AP) — Three days after winning the national title with a fully caged helmet, Bobby Brink stepped onto the ice in the U.S. capital for his rookie lap with nothing on his head but a big smile.

North of the border in the center of the hockey universe, Owen Power did the same in his fresh Buffalo Sabres uniform in the Toronto arena where he attended games as a kid.

Brink and Power were among five players making their NHL debut Tuesday night, fresh off the end of the college season. Matty Beniers became the first Seattle draft pick to play for the expansion franchise when the Kraken visited the Calgary Flames, and Arizona got a double debut of Beijing Olympics with American Nathan Smith and Canadian Jack McBain in the lineup against New Jersey.

Brink couldn't sit still two hours before warmups and couldn't stop smiling and fidgeting with his stick in the seconds before he went down the tunnel before his Philadelphia teammates. The accomplishment of moving so quickly from the Frozen Four to the pros with a handful of others wasn't lost on him.

“It’s definitely cool seeing other guys playing and making their debuts,” said Brink, who was the nation's leading scorer on the way to helping Denver win its ninth national title. “I imagine their situation is pretty similar to mine. It’s pretty special for them, too.”

There was no easing in for either player. Power's first shift came against Maple Leafs stars Auston Matthews and Mitch Marner, while Brink lined up next to childhood hero Alex Ovechkin for the opening faceoff.

“A guy that I watched a lot,” he said. “It’s definitely a really cool moment to be playing against a legend and one of the greatest players to ever play the game.”

Power, from nearby Mississauga, Ontario, skated almost 20 minutes in a 5-2 Sabres victory in front of friends and family. He was swarmed by them — many wearing his new No. 25 Buffalo jersey.

Once Kent Johnson and Michigan teammate Nick Blankenburg suit up for the Blue Jackets, which could come as soon as Wednesday in Montreal, they'll be the 10th and 11th players to skate in the NCAA and NHL this season.

Boston signed free agent Marc McLaughlin and plugged him right in last month, and Toronto did the same with Nick Abruzzese, a fourth-round pick in 2019 who had become one of the Leafs' top prospects. Brink is the third college player to debut this spring for the Flyers after Noah Cates and Ronnie Attard.

It's not uncommon for prospects to play late in the NHL season after they're done with college, though this year the sheer depth of talent is more than usual. Flyers coach Mike Yeo credits the college development system for this breakthrough.

“It says a lot about college coaching that we’re seeing right now as far as the way that those players are developed and possibly even recruited,” Yeo said. “There’s great competition at the college level, and I think they get great coaching at that level.”

Some of the players even got the added boost of taking part in the hockey tournament at the Olympics because the NHL didn't participate. Johnson would be the 10th Beijing Olympian to reach the NHL this season, joining Canada teammates Power and McBain, Beniers, Smith, Abruzzese, Cates and Smith from the U.S. and two veterans from Finland's gold medal-winning team: goaltender Harri Sateri and defenseman Petteri Lindbohm.

USA Hockey taking 15 college players to Beijing made it likely a lot of them would reach the NHL, but five this quickly is impressive, and Matthew Knies could make it six if he signs with Toronto.

“Super special,” Cates said. “We had a really fun group over there. Kind of expected it with just how good all these players were. Obviously really happy for all those guys and it’ll be fun to watch for years to come and play against these guys.”