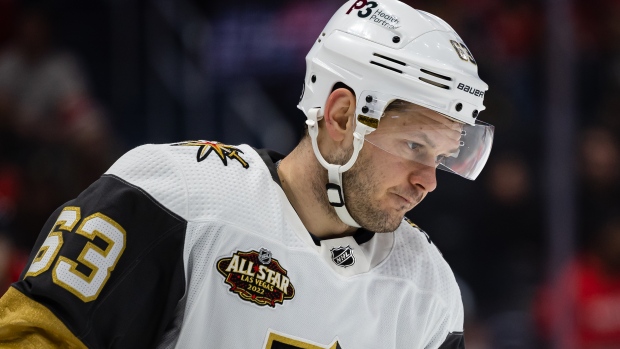 The National Hockey League announced Wednesday that it has invalidated Monday's trade between the Anaheim Ducks and Vegas Golden Knights that would have sent Evgenii Dadonov to Anaheim.

"The trade could not be concluded because Dadonov’s contract includes a limited no-trade clause, which has not been complied with," the league explained in a release.

The Golden Knights expect Dadonov to be in the lineup on Thursday when they face the Nashville Predators, according to TSN Hockey Insider Pierre LeBrun.

The Golden Knights expect Dadonov to be in the lineup playing for them tomorrow night.

"The Vegas Golden Knights recognize the league’s decision and welcome Evgenii back to our club," The team said in a Tweet, following the NHL's announcement.

The Vegas Golden Knights recognize the league’s decision and welcome Evgenii back to our club. #VegasBorn

“We respect and accept the decision made today by the NHL with regard to our trade with Vegas on Monday," Ducks general manager Pat Verbeek said in a statement. “Evgenii Dadonov is a player we thought could help our team this year and beyond. We will move forward and welcome John Moore to our organization once he's healthy and ready to return.”

The Ducks announced the acquisition of Dadonov and a second-round pick from the Golden Knights in exchange for defenceman John Moore and Ryan Kesler's contract. The league, however, said later Monday it was investigating further due to an issue with Dadonov's no-trade list.

TSN Hockey Insider Darren Dreger reported on Monday that neither team involved in the deal was aware that Anaheim was on Dadonov's list.

The 33-year-old forward, who was traded to Vegas from the Ottawa Senators last summer, holds a 10-team no-trade clause in his contract. ​Dreger added that the no-trade list wasn’t presented in the original trade sending Dadonov to Vegas.

Dadonov has tallied 15 goals and 12 assists in 62 games with the Golden Knights this season. He is signed at a cap hit of $5 million through the 2022-23 season.

Moore, who has appeared in 544 career games, was acquired by the Ducks on March 19 in the trade that sent Hampus Lindholm and Kodie Curran to the Boston Bruins. The 31-year-old is signed through next season at a cap hit of $2.75 million.

Kesler last appeared for Anaheim in the 2018-19 season and has career totals of 258 goals and 315 assists in 1,001 games. His contract runs through this season, carrying a cap hit of $6.875 million on long-term injured reserve.