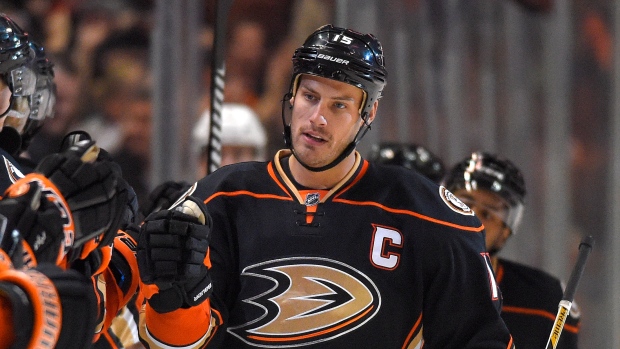 The NHL announced the fine several hours before Game 5 of the series in Anaheim. Getzlaf, the Ducks' leading scorer in the post-season, expressed a measure of remorse after the Ducks' 3-1 loss to the Nashville Predators.

"A situation like that, where I'm on the bench by myself, frustration set in," Getzlaf said. "There was obviously some words said, not necessarily directed at anyone in particular. It was just kind of a comment. I've got to be a little bit more responsible for the words I choose. ... I understand that it's my responsibility to not use vulgar language, period, whether it's a swear word or whatever it is. We've got to be a little bit more respectful of the game, and that's up to me."

Getzlaf appeared to shout the inappropriate remark in frustration with an official after returning to Anaheim's bench. The game officials appeared to be too far away to hear Getzlaf, but television cameras were trained directly on him.

"That's my responsibility to understand that there are eyes and ears on us all the time," Getzlaf said. "Fortunately enough, nobody heard it. If you can read lips, it's a little bit harder, and I apologize for that. That's a thing that you won't hear from me again. I hope I didn't offend anybody outside the circle that we trust."

One year ago, Chicago forward Andrew Shaw was suspended for one game and fined $5,000 for directing a homophobic slur toward an official during a playoff game.

Getzlaf avoided a suspension for reasons not immediately made clear by the NHL, but the fine is the maximum allowable under the league's collective bargaining agreement with the NHLPA.

"Getzlaf's comment in Thursday's game, particularly as directed to another individual on the ice, was inappropriately demeaning and disrespectful, and crossed the line into behaviour that we deem unacceptable," said Colin Campbell, the NHL's senior executive vice-president of hockey operations. "The type of language chosen and utilized in this instance will not be tolerated in the National Hockey League."

You Can Play Project, an LGBTQ advocacy group dedicated to the eradication of homophobia in sports that was founded by Philadelphia Flyers scout Patrick Burke and his father Calgary Flames president Brian Burke, also criticized Getzlaf.

"Words matter and Ryan Getzlaf's words are offensive. No language considered homophobic belongs in sports. It's not the language of role models. This is yet another opportunity to educate athletes, teams and fans," said a statement from the organization on its verified Twitter account.

Getzlaf has scored 18 points in 16 playoff games during one of the best post-seasons of his NHL career, but he has been held scoreless in six of the Ducks' last seven games, including Game 5. The 2007 Stanley Cup champion is the second-leading scorer in the current playoffs, trailing only Pittsburgh's Evgeni Malkin.