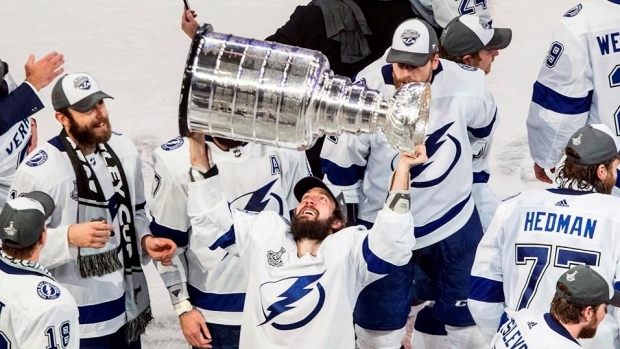 The National Hockey League is setting a target start day for next season.

TSN Hockey Insider Pierre LeBrun writes in The Athletic the NHL said during the general managers' call on Wednesday that it is targeting a hopeful start date of Oct. 12 for the 2021-22 season, roughly a week later than in a normal year.

The NHL on the GMs' call today shared its hopeful target date for puck drop next fall: Oct. 12.
Which is about a week or so later than normal.
Training camps hopefully opening Sept. 22.
Again, that Oct. 12 start date is if there are no delays. @TSNHockey @TheAthletic

LeBrun adds that training camps would begin on Sept. 22 if there are no delays.

This year's 56-game regular season started on Jan. 13 with the Stanley Cup playoffs scheduled to wrap up in July. However, LeBrun notes the league cannot say for sure when exactly the playoffs would begin next month considering the in-season delays some teams have dealt with. For now, the NHL plans to wait before finalizing a playoff start date.

Also discussed on the call according to LeBrun was the matter of international competition. The NHL told GMs the plan is still to participate in the Beijing Winter Olympics next February as long as a deal can be reached with the IIHF and International Olympic Committee. There is some urgency to finalize a deal as the league has to create a schedule for the 2021-22 season and would need to know whether to incorporate the Olympics or not.

Meanwhile, despite Wednesday's news that the Women's World Hockey Championship will not take place in Nova Scotia in May as scheduled, the NHL informed GMs the men's worlds appear to be moving forward in Latvia. Scheduled from May 21 to June 6, Bill Daly mentioned on the call that NHL players will be entitled to participate on the same basis they have in past years.

LeBrun also writes that GMs were told the 2021 NHL Draft -- scheduled for July 23 and 24 -- will be held virtually for a second straight year.

The annual general managers' meeting normally takes place sometime in March in Boca Raton, Fla., but was held via teleconference due to COVID-19.