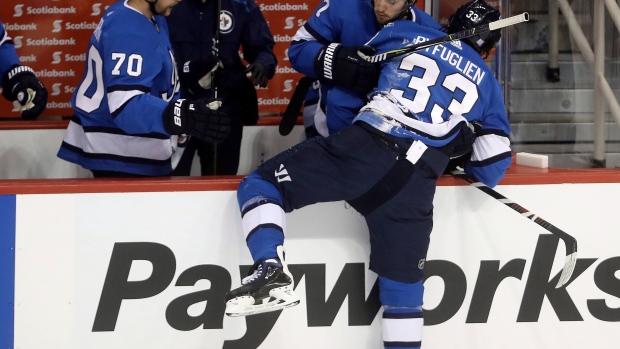 “So the spotter calls the hit. [Byfuglien] goes in, does his tests, gets a yes or no, and if it’s feeling good if it’s a yes, he can come back and play. And he did,” Maurice told reporters after practice.

Maurice’s comments came after TSN Hockey Insider Darren Dreger reported on Twitter that the National Hockey League intends to follow up to ensure the Jets followed the league's protocol regarding Byfuglien in Tuesday's loss to the Penguins.

While it’s believed Dustin Byfuglien was assessed according to NHL protocol, the league intends on following up on last nights post collision process.

Dreger said there is no assumption from the league, adding the "NHL regularly follows up on a nightly basis to assure protocol is being appropriately enforced."

Byfuglien was noticeably wobbly and struggled to his feet after colliding with Oleksiak in the second period and needed help from teammates to get back to the team's bench.

He was then pulled from the game to go through the NHL's concussion protocol. He passed testing and returned to the game later in the frame, logging a total of 22:03 of ice time in the loss.

Byfuglien was not on the ice for practice on Wednesday, though Maurice said everything seemed fine.

“Byfuglien felt good last night after the game and felt good against this morning, but we still monitor those things. We’ll see how he’s doing tomorrow morning,” Maurice said after the game.

“Just kept him [out of practice], a little precaution for us. He felt fine. He’s also been dealing with the flu going back a few days, so we’ve got a few guys that are fighting through it.”

The 33-year-old defenceman has two goals and 17 points in 21 contests with the Jets this season.