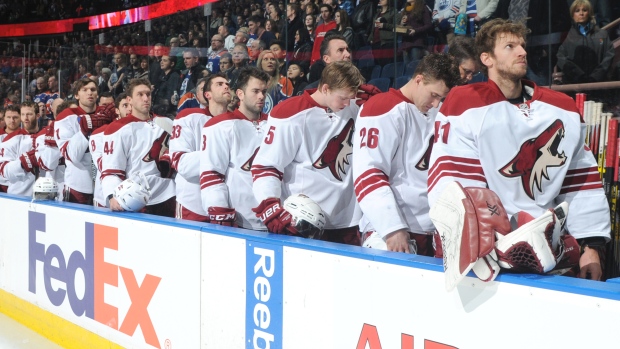 A U.S. bankruptcy judge has reiterated that the NHL should not receive the $145 million it demanded from former Phoenix Coyotes owner Jerry Moyes.

Moyes became the controlling owner of the financially troubled team and its new arena in 2006.

Two years later, he told the NHL that he couldn't afford to fund the team's operating losses. The Coyotes' losses have eclipsed $50 million per season. In 2009, the NHL was told that Moyes was discussing a possible sale of the team to Jim Balsillie and that Balsillie planned to relocate the Coyotes to Hamilton.

The NHL demanded that Moyes stop negotiating with Balsillie. Moyes responded by filing for Chapter 11 bankruptcy for the team and its assets, and he executed a sales agreement for the team to Balsillie.

The case resulted in a protracted legal battle and the proposed sale of the team to Balsillie was not approved. Instead, the NHL submitted a bid to buy the team out of bankruptcy protection for $140 million, a bid it subsequently won on Nov. 2, 2009.

Still, the NHL pressed its case in court and sued Moyes for $145.9 million, alleging that he violated an agreement to keep the team in Phoenix for seven years after he bought the team.

The NHL also demanded that Moyes should have to cover the league's legal fees and expenses.

In 2013, a bankruptcy court threw out most of the NHL's demands against Moyes and on Wednesday, a judge reiterated that finding and also recommended to a district court judge that Moyes should not be required to repay about $11.6 million worth of claims that the NHL has already paid to the team's creditors.

"The NHL's position throughout this action and during the bankruptcy case has been that the Coyotes and Moyes were in default of multiple obligations since prior to the filing of the bankruptcy cases," judge Redfield T. Baum wrote in his ruling. "Thus in the bankruptcy case, the NHL was entitled to recover all of its reasonable attorney's fees and expenses as a condition of the assumption of the bundle of contract rights acquired by the NHL. For whatever reason, the NHL never made any claim for those attorney's fees and expenses in connection with its purchaser of the Coyotes..."

All attorney fees and expenses should have been claimed by the NHL prior to its purchase of the team in 2009, the judge wrote.

The NHL's claim against Moyes for unpaid amounts owed to Gretzky should also be dismissed, Baum recommended.

The case will be decided in U.S. district court in coming months, and a judge there will use Baum's recommendation to make a ruling.

"The matters Baum ruled on will be dealt with on a de novo basis by the district court," NHL deputy commissioner Bill Daly wrote in an email. "Let's get past that phase before we need to determine whether further appeals are necessary."