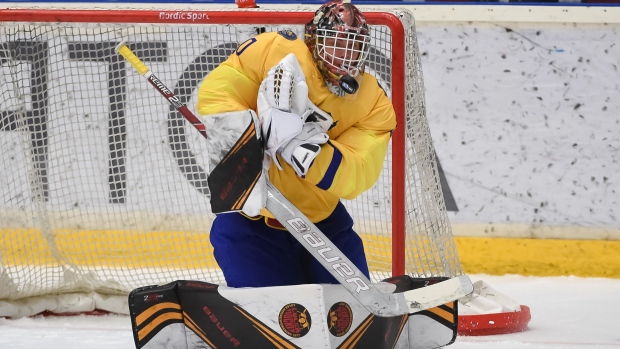 Power continues to be the clear choice at the top of the draft with the Buffalo Sabres selecting a defenceman first overall for the second time in four years after Rasmus Dahlin in 2018. The 18-year-old possesses a unique combination of skill, hockey sense and superior size that is comparable to Tampa Bay defenceman Victor Hedman.

At No. 2, Power’s Michigan teammate Matty Beniers becomes the first draft pick in Seattle Kraken history. They would also become the first collegiate players to go 1-2 since Boston University’s Rick DiPietro and Wisconsin’s Dany Heatley in 2000 and the first teammates since Montreal Jr. Canadiens Rejean Houle and Marc Tardif in 1969.

Mason McTavish vaults up from the Ottawa Senators at No. 10 to the New Jersey Devils at No. 4. An offensive player with an accurate shot who competes well in one-on-one battles according to TSN’s Bob McKenzie, McTavish had 11 points in seven games for gold-medal-winner Canada at the U-18 World Championship in May.

At ninth, the Vancouver Canucks get Kent Johnson, a centre who played at left wing this past season and is adaptable up front. Comparable to Elias Pettersson, he’s got great creativity, imagination and confidence with a quick hockey mind and quick hands.

Instead of selecting McTavish at 10, the Sens make the first goaltending pick of the draft with Lulea’s Jesper Wallstedt. At 14 years old, he was the youngest-ever player in the Super Elite Jr. League; at 17 he was the youngest-ever goalie in the Swedish Hockey League and now he is set to become the first Swedish goalie selected in the first round. If he is chosen in the top 10, he would be the first netminder since Carey Price in 2005 (No. 5) to go that high.

Assuming general manager Brad Treliving doesn’t trade his first-round pick – which he did twice in 2020 – the Calgary Flames go with Sioux Falls forward Cole Sillinger at 13. His father, Mike Sillinger, played with 12 teams in his 17-year NHL career but the Flames were not among them.

At 18, the Winnipeg Jets bolster their blueline with defenceman Corson Ceulemans. Reminiscent of Brent Seabrook, he has very good puck skills with the ability to get into the offensive zone, create scoring chances with his passing and to be a threat to score with his shot.

Sebastian Cossa is the next goaltender selected this year, landing with the Edmonton Oilers at No. 20. Montreal rounds out the Canadian team first-round selections with winger Sasha Pastujov, who had 65 points in 41 games this season playing for the USA Hockey National Team Development Program.

Here is the full mock: