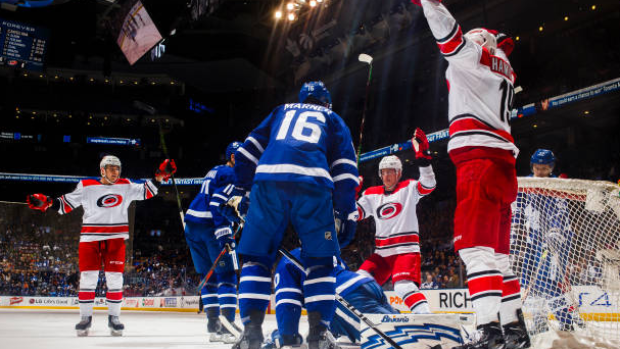 The Carolina Hurricanes were getting sick of looking at the daunting task staring back at them.

Sitting 26th overall three months into the NHL season, the players didn't hold a closed-door meeting or engage in any other type of rallying cry to get on track.

They simply started by flicking off the screen in the locker room that showed the standings — the one that served as a constant reminder of how far they had to go.

"Where we were at that particular juncture in the season wasn't great," Hurricanes captain Justin Williams recalled. "We just said, 'Let's focus on what we can do. Let's look back in a month and see what we've done.'

They most certainly have.

Carolina was 15-17-5 on Dec. 30, a meagre three points from the league basement. Since then, the Hurricanes are 29-12-2, just two points back of the Tampa Bay Lightning for the NHL's best record over that span to move into the Eastern Conference's first wild-card spot with a pair of games left on the schedule.

While the so-called "Storm Surge" — choreographed celebrations with fans following home victories that drew the ire of some hockey traditionalists — grabbed headlines, Carolina's success has mostly come down to hard work.

"Our belief as a hockey team is big, our accountability has gotten a lot better," Williams said. "We're big boys. We're not letting anyone get away with anything.

That's not to say the "Storm Surge" hasn't had an impact. It started with players bouncing off the glass instead of the traditional stick wave to the crowd after a victory, and morphed into a spectacle that would eventually grow to include the likes of boxing legend Evander Holyfield coming onto the ice and pretending to knock out one of the Hurricanes.

While old-school hockey people like Don Cherry loathed the outside-the-box approach to entertainment — the famed commentator dubbed the Hurricanes a "bunch of jerks," a moniker the team both embraced and monetized by putting it on a T-shirt — the recently-shelved celebrations connected with a non-traditional market that hasn't had much to cheer about.

"You have to understand what the whole premise behind it was: to engage our fans, thank them for sticking with this group," former Hurricanes captain and first-year head coach Rod Brind'Amour said. "You don't have to sell tickets (in Toronto), but we have to sell tickets in Raleigh. You've got to do a little extra.

"People are going, 'You're showing up the other team.' No we're not, the team's long gone. I love it. It's been a little sidebar and it's helped this group. It's something to look forward to."

Darlings of the advanced statistics crowd in recent seasons, the Hurricanes probably should have snapped a playoff drought that stretches back to 2009 — currently the NHL's longest — before 2018-19, but for whatever reason were unable to put things together.

"It would be huge," Brind'Amour said of a potential return to the post-season. "(We) try to keep it away from the group. There's a lot riding on it.

"It would be good for the momentum. We've created a lot of momentum. The people believe in our group, our team. But at the same time, we've got to get in and then see how things go. This is a big week for us."

That week started with Tuesday's 4-1 victory over the Maple Leafs before Thursday's home game against the New Jersey Devils and Saturday's trip to Philadelphia to take on the Flyers that will wrap up the regular season.

The Hurricanes are in a battle with the Columbus Blue Jackets and Montreal Canadiens for the East's two wild-card spots, but know if they win out, Carolina will be in the post-season dance for the first time in a decade.

"It's a pretty big opportunity," Williams said. "This is what, as professionals, you want to do — play important games."

And the 37-year-old knows a few things about those.

Nicknamed "Mr. Game 7" for his playoff heroics, Williams lifted the Stanley Cup with Carolina in 2006 with Brind'Amour before also winning in 2012 and 2014 with the Los Angeles Kings.

He returned to Carolina in free agency in the summer of 2017, signing a two-year deal with the club.

Williams has 23 goals this season, the most he's scored since 2006-07, and is leading by example on and off the ice, almost willing his team into the post-season.

"We've become relevant again and respected," Williams said. "That's a step, but we have many more to take."

Connor McDavid is usually about as brief as they come with the media. So when Edmonton's superstar captain sounded off on another lost season after his team was officially eliminated from playoff contention this week, it raised more than a few eyebrows. "It's frustrating. We want to play in the playoffs as a team," the 22-year-old told reporters in Las Vegas after Monday's 3-1 loss. "I personally want to play in the playoffs. I'm not happy about it. It's going to be a long summer."

Boston winger Brad Marchand had a goal and an assist Tuesday to join Nikita Kucherov, McDavid, Patrick Kane and Leon Draisaitl in cracking 100 points this season. The 2018-19 season represents the first time in 12 years that five or more players have reached the century mark.