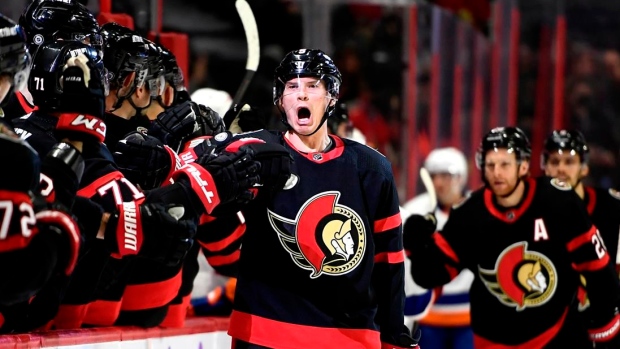 The Ottawa Senators are probably getting sick of each other.

The good news? At least they're no longer sick.

Having emerged from their second COVID-19 outbreak this season, the Senators will have played just once in 3 1/2 weeks because of coronavirus-related postponements when they visit the Calgary Flames on Thursday.

"It's getting a little old," Ottawa winger Zach Sanford said of skate after repetitive skate with teammates following a recent practice. "You play the game to play games and compete.

"When you don't get to do that, you're missing a big part of what you do."

The Senators have suited up for just 29 games this season — only the New York Islanders (28) have played fewer contests — thanks to outbreaks, the NHL's extended holiday pause in response to the Omicron variant, and postponements related to attendance restrictions in some Canadian markets, including their own.

Ottawa has seen a league-high 14 games scrubbed since the middle of November, with only one rescheduled game played to date.

Some of the remaining 13 will have to be shoehorned into what was going to be the league's Olympic window in February, while part of a rearrangement to the NHL calendar seems likely for the others.

Ottawa's only game over the last 25 days was a 6-0 loss in Toronto against the Maple Leafs on Jan. 1 when the Senators we minus six players because of COVID-19 protocol before more positives forced a shutdown that was followed by further delays.

"It's a tough time for everyone," head coach D.J. Smith said. "It's just unfortunate for our group that played through (some of its November outbreak). I don't know how many guys we played without and battled, and lost a lot of games. Now that we're healthy, we're missing all these games against teams that are losing guys.

Thursday in Calgary was supposed to be the fourth outing of a five-game road trip for Ottawa, but will instead represent its opener after contests in Seattle, Vancouver and Edmonton were postponed. The Oilers will now host the Senators on Saturday — a night when Ottawa was supposed to be in Winnipeg.

"You just have to be a little bit open-minded," Senators forward Austin Watson said of not knowing when the next game will be played. "There's a professionalism, and it gets challenged in times like this.

"Normal years, there's something to it — being a pro in the league — but right now especially, being able to maintain your quality of work, your detail and your energy on a day-to-day basis when you have no idea when you might play again, it's testing guys."

Smith was happy with his team's intensity during its Alberta practices after Ottawa flew to Edmonton expecting to play Monday before the game was scratched with a number of Oilers, including Connor McDavid, in COVID-19 protocol.

"You try to come up with a little bit of competition," Smith said of recent on-ice sessions. "But it's hard. At the end of the day, you've got to play games. You've got to bang into people."

"We adjust on the fly," Watson added. "Mentally, it can be a little exhausting not playing for so long."

They'll finally get that chance Thursday.

"We understand the situation," Smith said. "It's hard on the league, it's hard on everyone.

The Montreal Canadiens are another team returning after a long break.

The club had an incredible 24 players in COVID-19 protocol as recently as last weekend on the heels of a miserable start to the season thanks to poor play and injuries that cost general manager Marc Bergevin his job.

Jake Allen knows it, but the goaltender also believes the games still carry plenty of weight.

"We all know where we are in the standings," he said before Montreal returned to action Wednesday night in Boston. "We've got to look from a realistic standpoint ... what are we trying to do here?

"We need to instill some (good) habits."

"We've got to try build something here with some of these young guys," Allen continued, referencing the likes of Nick Suzuki and Cole Caufield. "We need to take things out of this season that are going to be positive, that are going to help this team (and) organization going into next year.

"That's going to be the biggest mantra."

Malkin's game-winning goal was the 74th of his career to tie Mario Lemieux for second all-time in franchise history behind only Jaromir Jagr (78).

Pittsburgh has won 11 of its last 12 games to occupy the Eastern Conference's first wild-card spot.

The Calgary Flames have been one of the NHL's surprises with the sixth-best points percentage in the West after missing last season's playoffs.

They also got a lesson in what the next level up looks like.

Still finding their legs after a massive COVID-19 shutdown, the Flames dropped recent road games against the Florida Panthers (6-2), Tampa Bay Lightning (4-1) and Carolina Hurricanes (6-3) — three of the East's powerhouses.

And like the Senators, who will represent Calgary's first game in nearly a week Thursday, the Flames are sick of practising.

"It almost feels like we're in our third training camp," Lucic continued. "But you've got to take the positives out of it. You've got to look forward to getting better every single day.