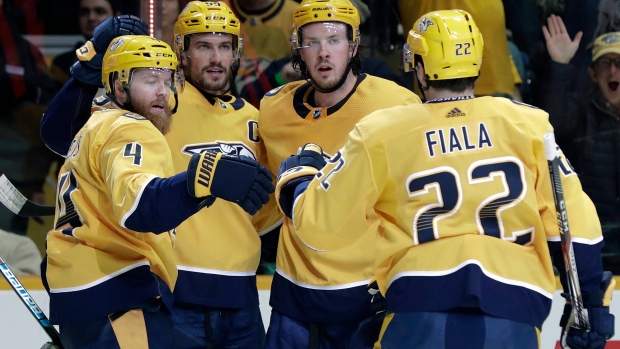 The Predators defenceman with a larger-than-life personality announced on New Year's Day he would be starring in his own show beginning later this month — one that will follow him as he lives and plies his trade in and around Nashville.

"It's just a great opportunity," Subban said this week. "It should be exciting. You've got to watch to see what's going on."

Asked about the endeavour, head coach Peter Laviolette said he hadn't seen it — "The PK Project" doesn't actually begin airing until later this month in the U.S. on NBCSports.com — but added he doesn't have any issues.

"Players, they get away from the rink, their time is their own," Laviolette said. "As long as the focus stays at the rink, that's what we worry about."

The Presidents' Trophy winners with the NHL's best regular-season record in 2017-18 before getting knocked out in the second round of the playoffs by the Winnipeg Jets, the Predators have had plenty of injury worry through the first half of the schedule.

But despite a 3-7-1 stretch in December that included a six-game losing streak, the Predators have managed to stay in the Central Division hunt.

There was a hiccup in Detroit after consecutive wins (Laviolette described Friday's 4-3 overtime loss as "awful") before Nashville got back on track with 4-1 victory in Montreal the next night and Monday's resounding 4-0 decision over Toronto to earn five of six points halfway through a season-long six-game road trip.

Nashville, which is still minus injured centre Kyle Turris, visited Chicago on Wednesday before heading to Columbus and Carolina.

The Predators sit a point behind the Jets for first in the division — Winnipeg did have two games in hand ahead of Wednesday's action — thanks to a familiar formula.

While scoring is up across the league, Nashville is averaging an NHL-low 2.45 goals against per game and resides in the middle of the pack at putting the puck in the net at just over three times per outing.

Forsberg was tied for the team lead at 14 goals when he returned to the lineup Monday despite his prolonged injury absence.

Veteran netminder Pekka Rinne has been his usual steady self, while the standout defence corps that still includes Roman Josi, Ryan Ellis and Mattias Ekholm survived without Subban.

"His whole life he's been a skilled defenceman," Laviolette said. "He's just getting an opportunity to show it."

Through it all, Subban is encouraged as the Predators, who made it to the 2017 Stanley Cup final before last year's memorable regular-season run, begin churning into the second half.

"We had the start of the season we wanted ... we ran into some injury trouble," he said. "(We're) just getting guys back now and trying to get back to doing what brought us a lot of success over the years — playing hard on the road and playing smart."

And is there any worry that the new TV show starring Subban, who has led the charge of NHLers beginning to express themselves publicly, will be a distraction for the player as his team begins its push?

Not even a little.

"Getting your mind off the game and doing other things can make you better," he said. "You have to find what works for you. What works for me may not work for the next guy.

"You have to work within yourself and know what's going to provide you with the amount of energy that you need to do your job."

It took Erik Karlsson some time to adjust after the star defenceman was traded from Ottawa to San Jose. Now, consider the two-time Norris Trophy winner adjusted. Karlsson had three more assists in Tuesday's 7-2 blowout over Edmonton — his 14th straight game with at least one assist. Karlsson has one goal and 24 assists in those 14 games. In his last six outings, he has an eye-popping 15 points (one goal, 14 assists). The last blue-liner with a stretch like that? Karlsson, when he was with Ottawa in 2011-12.