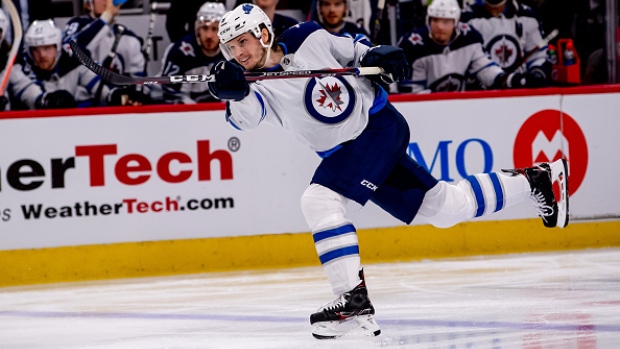 According to Larry Brooks of The New York Post, the Rangers and Islanders are among the most aggressive teams pursuing Jacob Trouba from the Winnipeg Jets, with the New Jersey Devils also showing interest.

Trouba is a restricted free agent this summer and his days in Winnipeg appear numbered. Brooks believes Trouba could carry a cap hit of $7.5 million on a seven-year deal on a deal signed this off-season, but adds that his agent has not yest received permission to speak with other teams.

The Rangers, who have previously been linked to pending unrestricted free agent Erik Karlsson, own Winnipeg's first-round pick in this week's draft after trading Kevin Hayes in February. Brooks believes the Rangers could package that pick (No. 20 overall) with Pavel Buchnevich and Nils Lundkvist for Trouba. He adds, however, that the price could be even higher with up to 12 teams looking at Trouba and potentially creating a bidding war.

Trouba, 25, was awarded a one-year, $5.5 million contract in arbitration last summer and can become unrestricted free agent in 2020. He scored eight goals and posted 50 points in 82 games this season while averaging 22:52 of ice time, second most on the team.

Joe Haggerty of NBC Boston believes the Bruins should be aggressive in tweaking their roster this summer despite pushing the St. Louis Blues to Game 7 in the Stanley Cup Final.

Haggerty argues that the team needs to find a first-line power forward to join Patrice Bergeron and Brad Marchand on their top line and wonders if now is the time to sell high on defenceman Torey Krug.

Krug, 28, posted two goals and 18 points in 24 playoff games while averaging 22:21 of ice time a night. He is entering the final season of his current contract which carries a $5.25 million cap hit and Haggerty notes he will be due a significant raise next summer.

With Krug's value likely at an all-time high, Haggerty believes he could land the Bruins the power forward they desire, but notes it won't be easy to part with a player who was in Conn Smythe conversation during the post-season.

Another sell-high candidate for the Bruins, Haggerty writes, is centre David Krejci, who had a bounce-back season with 20 goals and 73 points in 81 games this year. Krejci carries a $7.25 million cap hit for another two seasons and moving the 33-year-old could give the Bruins significant room to manoeuvre this summer.

The Philadelphia Flyers set an NHL record this season using eight different goaltenders and it appears the team will soon have another new face between the pipes.

Michal Neuvirth, Cam Talbot and Brian Elliott are all pending unrestricted free agents and Dave Isaac of The Philadelphia Courier-Post believes it's unlikely any of the three will be re-signed

General manager Chuck Fletcher said that the team's search for a backup to Carter Hart "very well could go to July 1, but there could be some opportunities prior to that.”

Following their buyout of defenceman Andrew MacDonald, the Flyers are projected to have $33 million in cap space (on an $83 million salary cap) and Fletcher said he will look to upgrade his blueline with the open space, if possible.

“They’re not easy to find," Fletcher said of top defenceman. “Certainly, if we can find a guy that can play in our top four that we’d have the ability to acquire, we’ll certainly look at it. I will say we have some really top-end young defencemen here that have the opportunity to grow into that role, if you’re looking at Ivan Provorov and Travis Sanheim.

"We’re bullish on Philippe Myers’ upside. Shayne Gostisbehere is a young man that’s been very effective in his young career so far. In bringing in Matt Niskanen, we feel that we have some quality defencemen. You’re always looking to upgrade if you can, but it would depend on if you could acquire that player and even whether that player’s available.”