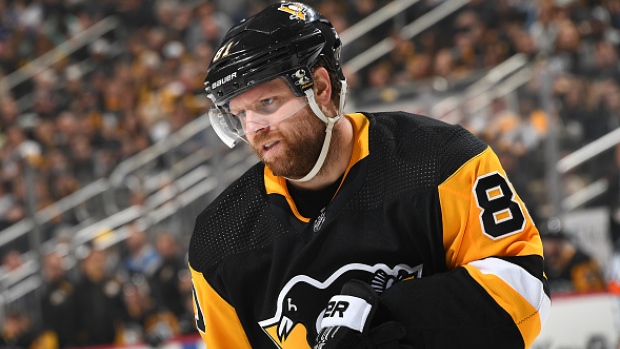 A Matter of When, Not If

It appears Phil Kessel's days with the Pittsburgh Penguins are numbered whether or not he waives his no-trade for the Minnesota Wild.

According to TSN Hockey Insider Pierre LeBrun, Penguins general manager Jim Rutherford is discussing a Kessel trade with teams around the league and adds that, "it's a question of when, not if, for Kessel to be dealt but where exactly remains to be determined."

Josh Yohe of The Athletic reported Thursday that the Minnesota Wild had an offer on the table for Kessel in a deal which would have included forward Jason Zucker heading back to Pittsburgh. Yohe added the deal was dependent on Kessel waiving his no-trade clause, which LeBrun adds he is leaning against.

Kessel has an eight-team approved trade list and LeBrun notes a few clubs on that list have reached out to the Penguins. Yohe reported Thursday that the Arizona Coyotes could be a landing spot for Kessel given his relationship with former Penguins assistant coach Rick Tocchet, but the team's current ownership situation is holding them back from making an offer.

Matthew DeFranks of The Dallas Morning News believes the toughest decision facing the Stars this off-season is what to do with forward Valeri Nichushkin.

Nichushkin returned to the Stars this season after two years in the KHL, but failed to score a goal and posted 10 assists in 57 games this season.

In a chat with readers, DeFranks pointed out that the Russian winger is the team's sixth-highest paid forward, carrying a $2.95 million cap hit, and wonders whether general manager Jim Nill will consider a buyout to clear cap space.

DeFranks believe the Stars also face a tough decision on whether to keep restricted free agents Mattias Janmark and Brett Ritchie after down years, but ultimately believes both are worth tendering a qualifying offer to.

Erik Karlsson battled through a groin injury throughout the playoffs with the San Jose Sharks before finally missing the team's season-ending Game 6 to the St. Louis Blues on Tuesday.

Karlsson, who is scheduled to become a unrestricted free agent on July 1, said it's still to be determined whether he need surgery, but added there is no long-term concern.

“Not sure yet. We’re still in that process,” he explained. “That’s why I can’t really say, because I don’t really know myself. All I know is it’s not going to be anything that will be a problem moving forward. I’m going to be able to have a normal summer with training and everything and getting ready. That’s great.

“It’s just unfortunate it happened when it did.”

A two-time Norris Trophy winner, Karlsson said Thursday he expects to test the free agent market as a UFA for the first time in his career.

Defenceman Slava Voynov was credited with 41 games served towards his one-year suspension by arbitrator Shyam Das on Thursday, allowing him to return to the NHL halfway through next season.

The Los Angeles Kings terminated Voynov's contract in 2015, but still own his rights since the Russian is only on the voluntary retired list. The Kings announced Thursday, though, that Voynov will not play for the team.

"Today the NHL arbitrator rendered a final decision on further discipline to Slava Voynov. From our perspective, the player will not be playing for the Kings. We will now determine the impact of the arbitrator's decision on our rights to the player and consider our options going forward."

Voynov was suspended indefinitely in October 2014 after being arrested and accused of abusing his wife. He pleaded no contest to a misdemeanour, left the United States to go back to Russia and in July had the conviction dismissed by a judge in Los Angeles. His most recent suspension was imposed in April after he applied for reinstatement.

Since his last NHL game, Voynov played three seasons in Russia's Kontinental Hockey League and won a gold medal at the 2018 Winter Olympics.

Files from The Canadian Press were used in this report