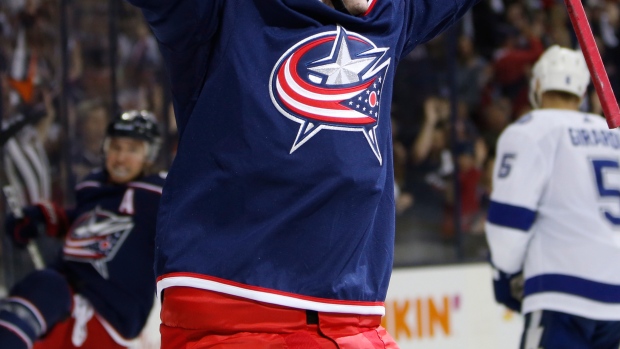 While nothing can be official until Monday, Matt Duchene is slated to join the Nashville Predators according to TSN Hockey Insider Pierre LeBrun. The contract cannot officially be negotiated until Monday but it sounds like $56 million over seven years is what has been discussed, LeBrun adds.

As others have also speculated, while nothing can be signed until Monday, Matt Duchene slated to join Nashville. Contract can’t be officially negotiated until Monday but sounds like $56 million over 7 years is what has been discussed.

According to The Athletic's Aaron Portzline, the Columbus Blue Jackets have made a "massive late-night offer in an attempt to keep Artemi Panarin."

"Also hear the CBJ offered around $12 M or so a year over 8 years..." TSN Hockey Insider Pierre LeBrun wrote on Twitter.

According to TSN Senior Hockey Reporter Frank Seravalli, expectation is that Tyler Myers and the Vancouver Canucks are closing in on a five-year, $30 million deal that will be signed on Monday. TSN Hockey Insider Darren Dreger reported earlier in the day that the parties were working on a deal.

Expectation is Tyler Myers and #Canucks are closing in on a 5-year, $30 million deal to be signed Monday - as @DarrenDreger reported earlier was in the works.

Dallas shooting for the Stars?

Dallas Stars are hoping to add two veteran forwards. Pavelski expected to sign a 3 year contract with the Stars and it’s believed Dallas is also an option for Corey Perry.

Corey Perry is heading to the Dallas #Stars on a one-year deal. Expectation is a $1.5 million salary with performance bonuses attainable. #TSN

Perry likely left some money on the table in base salary. His base salary is $1.5 million, with another $1.5 to $2 million expected in performance bonuses for games played and playoffs. #sjsharks and #tblightning were among the teams in hardest on him at the end.

"Perry likely left some money on the table in base salary. His base salary is $1.5 million, with another $1.5 to $2 million expected in performance bonuses for games played and playoffs. [San Jose Sharks] and [Tampa Bay Lightning] were among the teams in hardest on him at the end," Seravalli added.

Luke Schenn is expected to sign a one-year deal with the Tampa Bay Lightning in the neighbourhood of $700,000 according to TSN Senior Hockey Writer Frank Seravalli.

Expect Luke Schenn to sign a one-year deal with #tblightning in neighbourhood of $700k.

"Sounds like Richard Panik will be heading to the [Washington Capitals] on a four-year contract. AAV could be somewhere north of $2.5 million," TSN Hockey Insider Bob McKenzie wrote on Twitter.

Sounds like Richard Panik will be heading to WSH on a four-year contract. AAV could be somewhere north of $2.5M.

Panik had 14 goals and 19 assists in 75 games for the Arizona Coyotes last season.

All signs point to Brett Connolly signing a four-year deal with the Florida Panthers on Monday according to TSN Hockey Insider Pierre LeBrun.

As @Bob_Stauffer mentioned, I’m told all signs point to Brett Connolly signing a four-year deal with the Panthers on Monday https://t.co/q9fTYXryw9

Bob Stauffer also notes that Connolly could end up in Florida on a four-year term.

Don’t be surprised if Brett Connolly represented by Gerry Johansson ends up in Florida possibly on a 4-year term https://t.co/pLJ9tGSiWh

Connolly had 22 goals and 24 assists last season in 81 games.

TSN Hockey Insider Bob McKenzie notes that Mats Zuccarello to the Minnesota Wild on a five-year deal in the $6 million range -- give or take $200,000 -- is "quite likely" to happen on Monday.

Who’s still looking for a No. 1 goalie? CBJ? CAR? Lehner and Mrazek still very much in play. In other news, as @RussoHockey has been suggesting, Mats Zuccarello to MIN on a five-year deal in the $6M range, give or take $200K, is quite likely to happen tomorrow.

Zuccarello was dealt from the New York Rangers to the Dallas Stars last season but appeared in just two games before suffering a season-ending injury.

If and when Cody Ceci joins the Toronto Maple Leafs, he will be arbitration eligible.

TSN Hockey Insider Darren Dreger reported Ceci will likely get around $5 million in salary arbitration. Dreger also reported if Ceci plays well for the Leafs they could extend him in January, speculating a five-year deal around $5 million again.

Ceci will likely get around $5 mil in arbitration. If he plays well the Leafs can extend in January. Likely a 5 year ext...again around $5 mil per. Trade has to happen before any of this and there could be other elements involved. https://t.co/yMyE7uzY3M

Dreger's information was in addition to a tweet from the Ottawa Sun's Bruce Garrioch, who reported the Sens were not going to go back to arbitration with Ceci.

Ceci finished with seven goals and 19 assists in 74 games for the Senators last season.

Veteran free agent forward Corey Perry has been pitched by 10 teams and his camp is currently in the process of whittling down that list to 3-4 teams ahead of free agency opening Monday.

Interesting day for Corey Perry camp. He's been pitched by 10 teams, some really intriguing options. Perry is in the process of whittling down list to 3-4 finalists today, but a couple teams have jumped in late, realizing they're out on other UFAs.

TSN Senior Hockey Reporter Frank Seravalli reported a couple of teams have jumped in late on Perry, realizing they're out on other unrestricted free agents.

While most of the speculation regarding restricted free agents has revolved around Toronto Maple Leafs forward Mitch Marner, the rest of the class is very strong as well. One name to keep an eye on is Carolina Hurricanes centre Sebastian Aho. Aho doesn't have arbitration rights and according to the New York Post's Larry Brooks, could be in line for a hard time negotiating with his current team.

"The Canes, to my best knowledge, have not said they would not match on an offer sheet, but boy, it would be so tempting to find out," Brooks reported.

Aho finished last season with 30 goals and 53 assists in 82 games for the Hurricanes.

Not a one-in-one-out situation?

After the Buffalo Sabres acquired defenceman Colin Miller from the Vegas Golden Knights, speculation ramped up the team would move defenceman Rasmus Ristolainen.

But Sabres GM Jason Botterill disputed that it was a one-in-one-out situation.

”I think there’s always a demand for those,” Botterill said, per The Associated Press. ”I’m never going to be in a situation where I complain about too much depth.”

No action in Vegas?

Speaking of the Golden Knights, the Miller trade could be the team's last big piece of business for a while.

Per The Athletic's Jesse Granger, Golden Knights GM George McPhee said he thinks the team is done making moves, and also said not to expect any noteworthy moves in free agency.

The Golden Knights don't have any projected cap space at the moment.