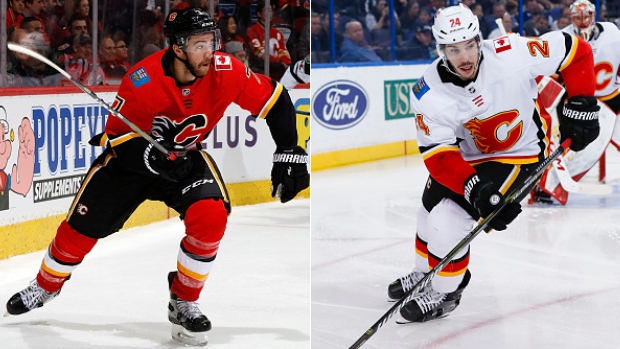 Travis Hamonic sits at No. 11 on the TSN Trade Bait board and TSN Hockey Insider Bob McKenzie said on the TSN Hockey Bobcast that he is one of two defencemen the Calgary Flames are considering parting with this summer.

“I’ve been hearing a lot that Calgary is very intent on moving a defenceman, either Travis Hamonic or TJ Brodie. Brodie and Hamonic are two names we’re hearing a lot of because the Flames have good young defencemen they feel can take over for one of those guys," McKenzie said.

"And also like when I mentioned the Michael Frolik potential trade, they are trying to free up dollars to be able to sign restricted free agent Matthew Tkachuk.”

In this edition of the TSN Hockey Bobcast, TSN Hockey Insider Bob McKenzie talks about NHL Commissioner Gary Bettman addressing some of the officiating issues ahead of Game 1 of the Stanley Cup Final, Maple Leafs defenceman Nikita Zaitsev asking for a trade, and runs through the latest on TSN Hockey's Trade Bait list.

Hamonic, 28, completed his second season with the Flames since being traded from the New York Islanders for a first-round pick and two second-round picks in 2017. He scored seven goals and posted 19 points in 69 games this season with an average of 20:52 of ice time per game.

Brodie, also 28, has spent his entire career with the Flames since being drafted in 2008. He scored nine goals and posted 34 points in 79 games this season while averaging 21:28 of ice time.

Both defencemen are entering the final year of their respective contracts and are both slated to hit unrestricted free agency next July. Brodie, who has an eight-team no-trade list, carries a $4.65 million cap hit for next season to Hamonic's $3.86 million cap hit.

Frolik was nearly dealt at the trade deadline in February in a deal for Jason Zucker that fell through with the Minnesota Wild. The 31-year-old scored 16 goals and posted 34 points this season and is also entering the final year of his contract. He carries a $4.3 million cap hit for next season and has a 10-team no-trade list in his contract.

Philadelphia Flyers general manager Chuck Fletcher said at the NHL Combine last week that he plans to be aggressive this summer in improving the team's roster and added he hasn't ruled out trading the 11th overall pick to do so.

"If we can get a good player at the right stage of his career and with some term left on his contract, we’d certainly look at it,” Fletcher told Sam Carchidi of The Philadelphia Daily News.

Fletcher, who is entering his first off-season with the team, told NHL.com he will consider all options when it comes to revamping the roster.

"I think we're going to be very aggressive in the trade and free agent markets in the sense of looking into every possible situation that can help us," Fletcher explained. "The unfortunate part is the vast majority of things you look into don't work out...so we're going to be very aggressive in trying to fill the holes we feel we have. I don't know if I can say we'll be able to fill all of them."

When asked to specify on the team's areas of need, Fletcher said there's no shortage of spots to improve.

"We need help everywhere," he added. "We need help on defence, at centre and on the wing. And, obviously, we need another goaltender, at least, if not two. We have a lot of needs. We'll be able to plug some of those holes, whether we're plugging them with players on six-year deals or players on one-year deals as placeholders to buy more time to find the right fit. We'll certainly have our roster upgraded next year, and hopefully we can find three or four players at 26 years old that we can plug in there for the next 6 to 7 years. I don't know if that's likely.

"We may have to have some Plan B options. We are aggressively looking in the trade market now. At the right time, we'll certainly speak to every agent for a lot of free agents and see if there's a fit, see if there's players that want to come to Philly and if there's the right fit for our club. The good thing is we've got the assets and the [NHL salary] cap space, and sometime in the near future, we'll make some good things happen, and hopefully sooner rather than later."

LeBrun, who reported last week the Maple Leafs discussed a trade with the Los Angeles Kings but couldn't reach a deal, added Sunday that the Arizona Coyotes had also spoken with the Leafs regarding Marleau.

Leafs and Coyotes have also chatted about Patrick Marleau. My sense is that for Arizona to get more interested Toronto would have to attach a premium asset in the trade as well.

According to LeBrun, the Coyotes would have to attach a "premium asset" to peak the interest of the Coyotes to take on Marleau's $6.25 million cap hit for next season. The 39-year-old scored 16 goals and posted 37 points in 82 games this season and has not missed a game since the 2008-09 season.

The Maple Leafs are facing a cap crunch with roughly $14 million in space (with Nathan Horton's $5.3 million hit on LTIR) on a projected $83 million salary cap for next season with Mitch Marner, Andreas Johnsson and Kasperi Kapanen all in need of new contracts as restricted free agents. General manager Kyle Dubas confirmed last week that Nikita Zaitsev is also available on the trade market after the defenceman requested a move out of Toronto for personal reasons.