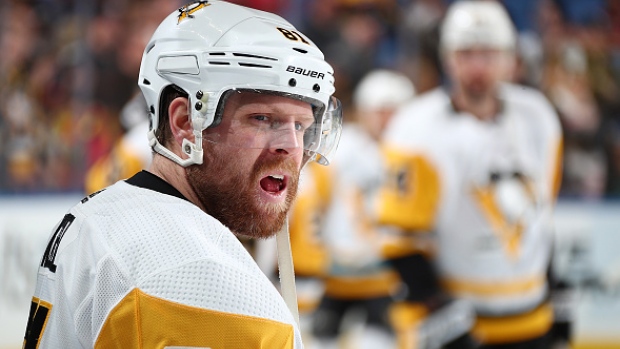 The Minnesota Wild had a trade in place last week to acquire Phil Kessel from the Pittsburgh Penguins, but the deal fell through when Kessel refused to waive his no-trade clause to move West.

According to Michael Russo of The Athletic, Kessel doesn't believe the under-construction roster of the Wild is close to contending for a Stanley Cup and a phone call with general manager Paul Fenton wasn’t enough to change his mind.

Kessel has an eight-team approved trade list in his contract. The Wild aren’t on that list and it does not appear he'll be moving to Minnesota anytime soon.

As for the Wild, Jason Zucker was believed to be a key piece of their trade proposal for Kessel, marking the second time in 2019 that the 27-year-old has been a part of a trade that fell through. The Wild were reportedly close to dealing to Zucker to the Calgary Flames at the trade deadline in February, but that deal fell apart. He is listed at No. 4 on the TSN Trade Bait Board.

Russo reports the Vancouver Canucks, Flames, Arizona Coyotes and Anaheim Ducks remain interested in Zucker, who scored 21 goals and posted 42 points this season. He adds that Fenton "has at least inquired about" Sam Bennett and Michael Frolik in Calgary, Christian Dvorak and Christian Fischer of the Coyotes and Vegas Golden Knights winger Jonathan Marchessault as potential returns.

Since January, Fenton has traded Nino Niederreiter, Michael Granlund and Charlie Coyle, receiving Victor Rask, Kevin Fiala and Ryan Donato in return. Russo writes that the Wild are expected to have a difficult time luring free agents on July 1 with the current state of their roster.

A Kessel to the Wild trade may be dead, at least for now, but TSN Hockey Insider Pierre LeBrun wrote last week that Penguins general manager Jim Rutherford is still discussing a Kessel trade with teams around the league and added that, "it's a question of when, not if, for Kessel to be dealt but where exactly remains to be determined."

With that in mind, Josh Lile of the Dallas Morning News wonders if the Stars could be a landing spot for the 31-year-old. The Stars have $16.4 million in cap space on a projected $83 million cap and Lile writes Kessel "easily fits" in the team's cap picture.

A hold up for the Stars, however, would be forming a return for the Penguins. Lile writes that the Stars don't have a player of Zucker's calibre to part with and argues the team may have to offer quantity over quality. He suggests that  Radek Faksa, Valeri Nichushkin and Julius Honka could be available for the Penguins and the Stars could also take back another hefty contract to get the deal done.

The Stars will surrender their 2020 first-round pick to the New York Rangers if they re-sign Mats Zuccarello this summer and Lile believes the team should be interested in adding Kessel instead. As he points out, Kessel's current contract will expire in three seasons, just as defenceman John Klingberg will be in need of a new deal.

The Vegas Golden Knights are facing a cap crunch this summer and currently sit over the projected $83 million salary cap for next season, including David Clarkson's $5.25 million salary which can be shelved on long-term injured reserve.

Justin Emerson of the Las Vegas Sun believes the team will need roughly $10 million to sign restricted free agents William Karlsson, who he projects to receive a six year, $39 million deal, and Nikita Gusev this off-season and will still have three roster spots to fill.

Emerson notes that reports have indicated defenceman Colin Miller is on the trade block and believes the team could look to move Cody Eakin and Ryan Reaves as well to free space.

Miller is signed for three more seasons at a $3.875 million cap hit, while Eakin, who carries a $3.85 million cap hit, and Reaves, signed at $2.775 million, are both entering the final year of their deals. Moving all three would free $10.5 million, leaving the Golden Knights with just over $15.6 million in cap space (on an $83 million salary cap) with Clarkson's cap hit shelved.

Emerson suggests the Golden Knights could also elect to free cap space by buying out the final year of defenceman Nick Holden's deal. Doing so would clear $1.2 million of the $2.2 million Holden is currently signed for, but leave the team with a $600,000 cap penalty in 2020-21.