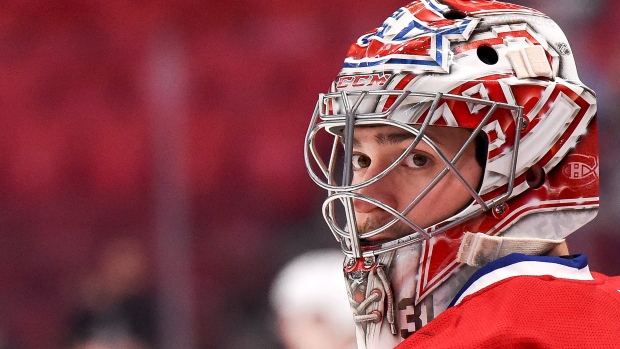 The NHL Play of the Year returns with another goaltending duel.

The 15th matchup of the Round of 32 pits Carey Price's last resort effort against Cam Ward's highway robbery.

Price looked more like a fish out of water than a goaltender for the dramatic save he made against the Chicago Blackhawks.

After making a reasonably easy save against Brandon Saad, Price made a stellar paddle stop against Andrew Desjardins. That would have probably been enough to make the Play of the Year tournament, but after the puck made an unusual bounce off his stick, Price had to turn his body and make a sprawling punching save to keep the puck out for the Habs.

Ward's beauty, on the other hand, was a lot smoother to the eyes.

Pittsburgh Penguins winger David Perron received a pass skating down on the right side and was ready to shoot into the yawning cage. Ward was ready as well. The veteran netminder pushed off with his right foot, stretched his glove hand out and robbed Perron point blank for the highlight reel play.

You can watch the highlights and make your decision here (http://poy.tsn.ca). Every vote counts, so watch all the plays and take part in the TSN.ca Play of the Year Showdown. Voting runs from 7pm to 4pm every day. Let us know who you voted for via Twitter, Facebook and Hubub.