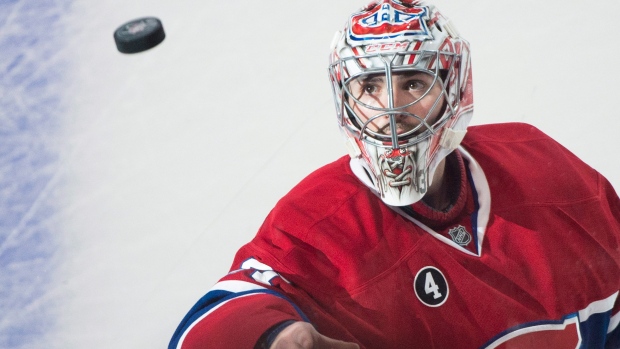 The NHL Play of the Year showdown continues today with a veteran playmaker taking on arguably the world's best goaltender.

Zetterberg's effort comes to us from the trick-shot discipline. The Red Wings captain seems to be looking for the open man in the crease when he cycles behind the Nashville Predators' net. However, he catches everyone by surprise by ricocheting a shot off Predators' netminder Marek Mazanec, hit his shoulder, then the back of his head and then the crossbar before dropping into the net.

Price looked more like a fish out of water than a goaltender for the dramatic save he made against the Chicago Blackhawks. After making a reasonably easy save against Brandon Saad, Price makes a stellar paddle stop against Andrew Desjardins. That would have probably been enough to make the Play of the Year tournament, but after the puck made an unusual bounce off his stick, Price turns his body and makes a sprawling, punching save to keep the puck out.

Zetterberg defeated St. Louis Blues' sniper Vladamir Tarasenko in the Round of 16 while Price advanced over Tyler Ennis of the Buffalo Sabres.

You can watch the highlights and make your decision -- here -- (http://poy.tsn.ca). Every vote counts, so watch all the plays and take part in the TSN.ca Play of the Year Showdown. Voting runs from 7pm to 4pm every day. Let us know who you voted for via Twitter, Facebook and Hubub.