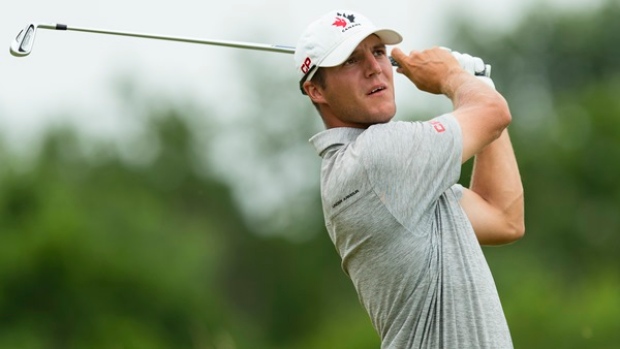 The Stanley Cup final may be in full swing, but NHL referee Garrett Rank has his sights set on another major sporting event.

The 30-year old amateur golfer from Elmira, Ont., earned a spot in the U.S Open on Monday by finishing tied for first at a regional qualifying tournament.

Rank shot 2-under over the 36-hole event to earn one of the three spots available at Ansley Golf Club's Settindown Creek Course near Roswell, Ga.

The Georgia tournament was one of 12 regional qualifiers on Monday.

Mackenzie Hughes of Dundas, Ont., also played his way into the U.S. Open after finishing tied for second at 10-under at his qualifying site, the Ridgeway Country Club in Memphis.

An accomplished amateur, Rank had to cut back on his time at the links when he became an NHL official in 2014. It was an offer he couldn't turn down, especially after he put his golf goals on hold in 2011 to fight testicular cancer.

But he remained active when his schedule allowed. He represented Canada alongside Austin Connelly at the 2015 Pan American Games in Toronto and teed off at the 2016 Canadian Open, where he made the cut and finished tied for 77th.

David Hearn and Nick Taylor also teed off in Memphis but failed to qualify. Hearn made it to a playoff before being eliminated.

Elsewhere, Toronto's Mark Hoffman just missed qualifying, losing a playoff for the fifth and final berth at a tournament at the Canoe Brook Country Club in Summit, N.J. Hoffman, who charged into playoff contention with a second round of 5-under, was named an alternate.

Corey Conners of Listowel, Ont., came close to pulling through but lost in a three-player playoff at Springfield Country Club to miss qualifying. He was named an alternate.