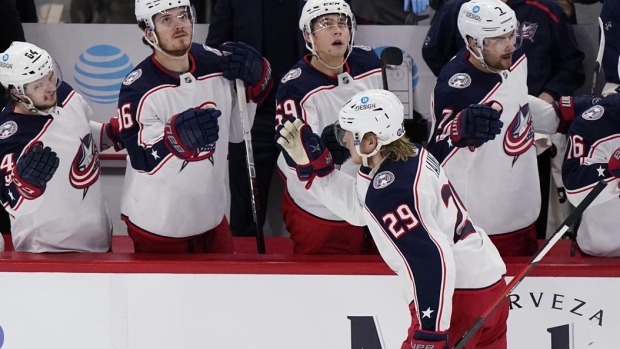 NEW YORK (AP) — The NHL is going back to Europe this fall for its first games outside of North America since the start of the pandemic.

The Sharks and Predators will finish their respective training camps in Europe. San Jose also will play an exhibition game in Bern, Switzerland, against the Swiss league’s SC Bern, while Nashville will go to Berlin to face Eisbären Berlin of Deutsche Eishockey Liga.

Their first of two games at Prague’s O2 Arena Oct. 7 and 8 will mark the first NHL game in Europe since the Tampa Bay Lightning and Buffalo Sabres faced off in Stockholm on Nov. 9, 2019. Chicago and Philadelphia were the last NHL teams to play in Prague in October 2019.

Nashville was set to open the 2020-21 season in Prague against Boston before the pandemic scrapped the NHL’s plans. This will be the franchise’s European debut after playing two games in Saitama, Japan, in 2000.

The Sharks were a natural pick because of Czech star Tomas Hertl, who recently signed a $65.1 million, eight-year contract to remain in San Jose. Hertl is a native of Prague.

Colorado and Columbus will play in Tampere on Nov. 4 and 5 with each team featuring plenty of Finnish flavor. The Avalanche have Mikko Rantanen and Artturi Lehkonen, while the Blue Jackets are managed by Jarmo Kekalainen and have star Finnish scorer Patrik Laine.

The NHL has so far staged 34 regular-season games outside North America in six different countries and eight cities. Tampere is set to be the ninth.