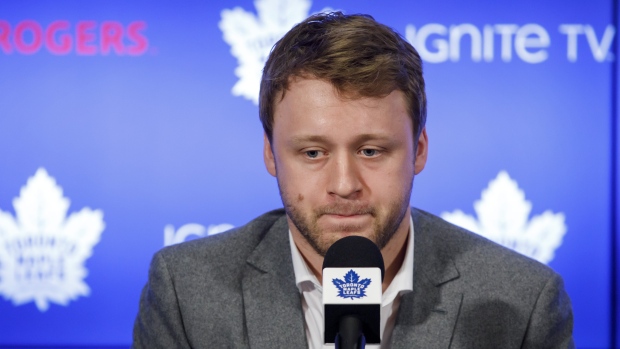 The NHL’s investigation into the alleged use of a homophonic slur picked up by a microphone during Monday’s game between the Maple Leafs and Lightning closed on Tuesday with the determination that Toronto defenceman Morgan Rielly didn’t direct any such language at referee Brad Meier.

In a joint press conference with Leafs general manager Kyle Dubas on Tuesday afternoon, Rielly said he would never have used such a term, and was “happy the investigation came out the way it did.”

But that relief is only part of the story. The larger narrative, to both Rielly and Dubas, is how the incident is a call to action for players and team management alike to continue battling for equality inside and outside NHL dressing rooms.

“I don’t think the team or Morgan are victims at all. I don’t want it to be perceived that Morgan feels that way or the team feels that Morgan was slandered,” Dubas said. “Rather than disputing what was said or what wasn’t, the focus should be if [a slur] was said, how horrible that is. Every time it’s even thought that those types of words are uttered in our facility or anywhere, we have to do our part as the Toronto Maple Leafs to [get] rid [of] casual homophobia, vulgar homophobia, things that make people of any sexuality or sexual orientation feel unsafe or uncomfortable in our facilities.”

Dubas said he first heard about the alleged slur while leaving Scotiabank Arena after Toronto’s 6-2 loss to Tampa on Monday. The audio in question came during the second period, when Rielly was visibly upset over a no-call on Lightning forward Yanni Gourde and was seen skating back towards Meier, shouting in his direction.

Having reviewed the video several times, Dubas called Rielly back to the rink immediately, where the defenceman “unequivocally denied” having uttered any sort of slur.

The NHL was also involved by then and Dubas said the Leafs cooperated fully with the league’s investigation, while Rielly was encouraged to remain silent until the issue was resolved.

“I was 100 per cent confident I didn’t use the word, so we allowed the process to play out,” Rielly said. “It was difficult at times to not make a statement because of how strongly I felt about it and the fact it is a very important issue. I think it’s an opportunity for us as a team to realize there’s really no place for slurs like that in sports or in life.”

Rielly said he wasn’t sure what words might have been exchanged with Meier after the no-call, only that they weren’t homophobic. The referee confirmed that with the NHL during their investigation.

However, the statement from NHL senior executive vice-president and director of hockey operations Colin Campbell didn't explicitly say that no one else on the ice used homophobic language, only that Rielly didn’t utter it.

Dubas pointed out that it was only last week at the NHL’s general managers meetings that the removal of racist, homophobic or grotesque comments from the game was discussed at length, and would have been dealt with by Meier regardless of the perpetrator.

“If a player who was hot at a non-call said that [slur] to an official, the official in my opinion would have right away ejected that player,” Dubas said. “I’ve listened to [the audio] so many times and I’ve heard every different theory. [But] even the thought that someone in our facility or on the ice could think of saying that in our building gives us a chance as an organization to ask, ‘Are we doing enough?’ What can we do more to make sure that’s the end to it and it’s not going to be welcome? If we can focus on the issue, we’ll all be better off.”

That’s where Rielly and Dubas want to keep steering the conversation. Dubas said he was initially surprised to hear it was Rielly, an alternate captain for the Leafs since 2016, being accused of using a homophobic term.

Not only has Rielly been active with the You Can Play Project, it was only a few weeks ago that he approached the Leafs’ community staff about getting formally involved in Toronto’s Pride Parade this June.

Dubas has marched in pride parades and for the past five years he and Leafs president Brendan Shanahan have examined ways to make the team’s culture as inclusive as possible.

“It’s incumbent on us to build an environment where if someone were gay, or questioning their sexual orientation, that they don’t feel that they have to come in here and be someone that they’re not,” Dubas said. “If a homosexual, bisexual, transgender fan walks in the rink, [the goal is] they feel welcome and safe here. If we have a player who’s contemplating what their sexuality is, that they feel safe [to] be themselves here. That’s why the cause matters to me.”

Now Rielly hopes he and the rest of his teammates can use this incident as a stepping stone towards following Dubas’ lead.

“When leadership supports something, the players follow. It’s important we’re sensitive to it and we’re aware of it,” Rielly said. “There’s no place for [slurs] on our team or in this rink. The fact that there is even a chance that word did get used last night means there’s more than can be done from a player’s standpoint in regards to equality.”