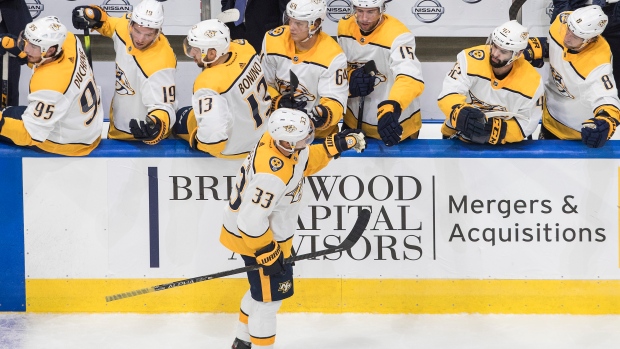 EDMONTON — Viktor Arvidsson supplied all the offence, and Juuse Saros and Pekka Rinne combined for the shutout as the Nashville Predators blanked the Dallas Stars 2-0 on Thursday in exhibition action.

Arvidsson opened the scoring 3:53 into the game for the Predators and doubled the lead at 8:52 of the second.

Filip Forsberg picked up an assist on both goals.

Saros started the game and stopped 12 shots before Rinne entered and made 14 saves, with the two goaltenders equally splitting ice time.

Ben Bishop stopped 16-of-18 shots in 30 minutes of action for the Stars before giving way to Anton Khudobin, who turned away all nine shots his way.

Nashville starts a best-of-five playoff qualification series with the Arizona Coyotes on Sunday.

Dallas plays its first game of the seeding tournament among the top four Western Conference teams against the Vegas Golden Knights on Monday.

TORONTO — Zach Werenski and Gustav Nyquist scored 18 seconds apart to cap a three-goal first period, and Columbus held on to topple the Bruins.

Boone Jenner opened the scoring 4:27 into the game for the Blue Jackets before Werenski and Nyquist made it a three-goal lead before first intermission. Alexandre Texier added an empty netter late in the third.

David Pastrnak put the Bruins on the board at 12:16 of the second with the first shot Elvis Merzlikins faced after taking over for Joonas Korpisalo at the midway mark of the game.

Korpisalo made 11 saves for Columbus while Merzikins kicked out 12-of-13 shots.

Tuukka Rask stopped 17-of-20 shots for Boston before Jaroslav Halak took over in the second half. He made 10 saves.

Bruins forward Brad Marchand went to the locker-room in third period and never returned. His status is day-to-day.

Columbus opens a best-of-five playoff qualification series with the Toronto Maple Leafs Sunday, while Boston plays its first game of the seeding tournament among the top four Eastern Conference teams against the Philadelphia Flyers on the same day.

EDMONTON — Reilly Smith scored twice in the first period, once shorthanded and another on the power play, as Vegas downed Arizona.

Alex Tuch and Nick Cousins added power-play goals late in the third period to put the game away for the Golden Knights.

Taylor Hall made it a 2-1 contest when he buried one for the Coyotes at 9:14 of the third.

Marc-Andre Fleury went the full 60 minutes and made 22 saves for Vegas. Antti Raanta and Darcy Kuemper combined to stop 23-of-26 shots for Arizona, with Cousins goal being an empty netter.

Coyotes forward Nick Schmaltz left the game after taking a high hit from Ryan Reaves. There was no penalty on the play.

Vegas plays its first game of the seeding tournament among the top four Western Conference teams against the Dallas Stars on Monday, while Arizona starts a best-of-five playoff qualification series with the Nashville Predators on Sunday.

This report was first published by The Canadian Press on July 30, 2020.