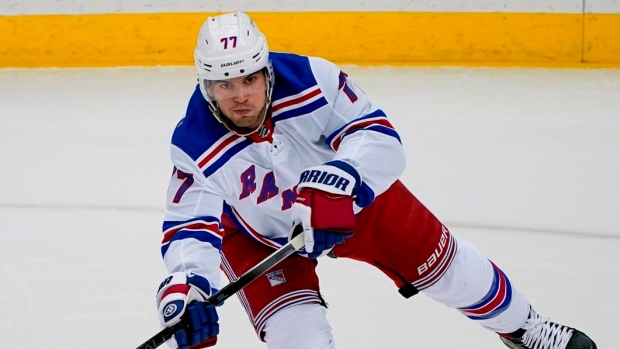 TSN Hockey Insider Pierre LeBrun wrote Thursday that buyouts could be made as early as Friday morning.

Technically, the NHL’s first buyout window opens 24 hours after the last Cup final game, so around 11 pm ET tonight, but for practical reasons I assume most teams would wait until Friday morning at the earliest to get going on that.

With the salary cap remaining flat at $81.5 million, many teams could consider using the buyout window to increase their cap space this off-season.

One player who has been seemingly awaiting a buyout for several months in New York Rangers defenceman Tony DeAngelo, who last played for the team in January.

TSN Hockey Insider Darren Dreger reported in April that the 25-year-old defenceman rejected the Rangers offer to mutually terminate his contract, instead electing to be bought out this summer. DeAngelo hasn't played since Jan. 30 following a reported altercation with a teammate after a loss.

According to Scott Powers of The Athletic, one team that does not plan to make a move in the buyout window is the Chicago Blackhawks.

The Blackhawks don’t currently plan to buy out any players, according to a source.

The Blackhawks could see as much as $5.54 million come off their books if they're able to complete a Duncan Keith trade this off-season.

What's Next for Toronto?

The Toronto Maple Leafs extended Travis Dermott on a two-year, $3 million contract ahead of the defenceman reaching restricted free agency this summer.

TSN Hockey Insider Pierre LeBrun said Thursday he believes there's "zero downside" to the deal for the Maple Leafs, arguing the team will either have an affordable defenceman on their third pairing, or will lose Dermott to the Seattle Kraken in the expansion draft.

The signing leaves the Maple Leafs with $9.35 million in cap space, per CapFriendly, this off-season with 17 players under contract. The team is expected to pursue a goaltender to share work with Jack Campbell next season and TSN Hockey Insider Darren Dreger said earlier this week the Leafs are among the teams with interest in pending unrestricted free agent Taylor Hall.

Dermott has appeared in 208 games for his career, scoring 11 goals and 47 points.

Driedger enjoyed a career season for the Panthers in 2020-21, posting a goals-against average of 2.07 and a save percentage of .927 with a 14-6-3 record. The 27-year-old, however, appears to be the odd man out in Florida, who will move forward with Sergei Bobrovsky and Spencer Knight in net.

LeBrun notes that the Panthers will now face a decision on whether to move Dreidger for assets, or allow the Seattle Kraken to select him in the expansion draft, protecting the remainder of their roster.

He broke down the situation, along with other off-season news on That's Hockey: