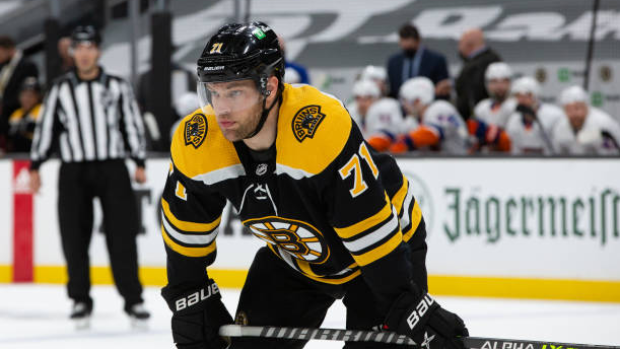 After another disappointing postseason exit, could the Toronto Maple Leafs be looking to make a big splash in free agency later this month?

TSN Hockey Insider Darren Dreger said Wednesday that while the Boston Bruins would like to re-sign Taylor Hall before he hits the open market on July 28, the Maple Leafs are among the teams with interest in the 29-year-old winger.

"(Bruins general manager Don Sweeney has) engaged in discussions about an extension for Taylor Hall with his agent Darren Ferris," Dreger said. "This shouldn’t come as breaking news, there was interest from the Boston standpoint prior to making the trade with the Buffalo Sabres.

"But there’s outside interest as well, including from the Toronto Maple Leafs, which may surprise some. Toronto has interest, I’m sure, if they can’t get Zach Hyman signed, or depending on what happens with Freddy Andersen.

"There are a lot of teams with interest in Taylor Hall but he’d like to extend his time in Boston."

Selected first overall in the 2010 NHL Draft, Hall is slated to hit free agency for the second straight year after joining Buffalo on a one-year, $8 million contract last October.

The Maple Leafs are projected to have just under $11 million in cap space this off-season, per CapFriendly, with 16 players under contract.

While Vladimir Tarasenko has requested a trade from the St. Louis Blues, Jeremy Rutherford of The Athletic writes finding a new home for the winger could prove difficult this off-season.

Rutherford reports that Tarasenko has submitted a list of roughly 10 teams he'd waive his no-move clause for, but his $7.5 million salary could be tough for most contenders to squeeze under their salary cap. He wonders whether there could be a fit in New York - with either the Rangers or Islanders - or if Tarasenko would consider waiving his no-move clause to join Connor McDavid in Edmonton.

Tarasenko, 29, had four goals and 14 points in 24 games with the Blues this season, adding two goals in four playoff games. He's been limited to just 42 games (including playoffs) over the past two seasons after undergoing a total of three shoulder surgeries. Rutherford reports his trade request stems from the team's handling of the first two shoulder surgeries - in 2018 and 2019.

Selected 16th overall in the 2010 NHL Draft, Tarasenko is under contract for two more seasons.

Dreger notes there's mutual interest in getting a deal done, but the cost for the Oilers to do so remains up for discussion.

Keith, 37, is a three-time Stanley Cup champion with Chicago and remains signed for two more seasons at a cap hit of $5.54 million. He had four goals and 15 points in 54 games with the Blackhawks last season.

Watch Dreger's full breakdown of the Keith situation and more below.