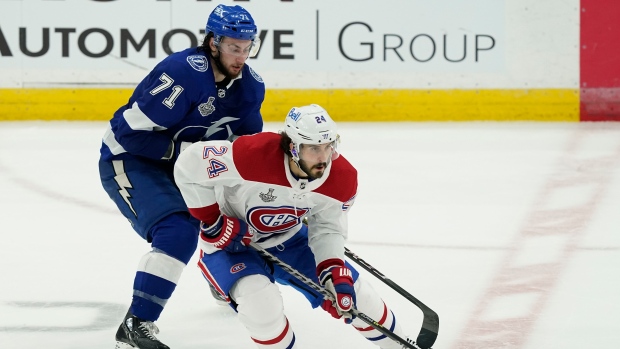 Danault to Hit the Open Market?

TSN Hockey Insider Pierre LeBrun reported Thursday that the Canadiens are expected to let centre Phillip Danault to hit the open market on July 28, though the door has not been closed on him re-signing in Montreal after that date.

Danault, 28, spent this season playing out the last of a three-year, $9.25 million deal signed with the Canadiens in 2018. He had five goals and 24 points in 53 regular season games and added one goal and four points in 22 playoff games as the Canadiens reached the Stanley Cup Final.

"In the meantime, the business at hand for the Montreal Canadiens during a very short off-season is Phillip Danault, their key pending unrestricted free agent, just coming off a terrific defensive performance in the Stanley Cup Playoffs.

"They made him an offer last off-season and it was rejected. My sense is that the Habs aren't planning a new offer at this time. They're going to let Danault go to free agency on July 28 but keep the door open for him to come back to them after he's heard from other teams, but it's a fluid situation.

Danault, who endured a 24-game goal drought to start the shortened season this year, admitted in his end-of-season availability that his contract situation affected his play early on.

"I was worried about the role that 'Suze' (Nick Suzuki) and 'KK' (Jesperi Kotkaniemi) would eventually play, but I think we see across the league that if you want to win, then you need three quality centre players - that was the case for the New York Islanders and ourselves this year -- and players who are good at both ends of the ice," Danault said last week. "That played a part (in my early season performance), but I've found my style of play, I know who I am and I know what I can bring to a team. And I know I can win. So it's been a big year, personally and collectively, with the team."

Selected 26th overall by the Chicago Blackhawks in the 2011 NHL Draft, Danault has 55 goals and 199 points in 392 games with the Canadiens and Blackhawks.

The Canadiens are projected to have just over $14 million in cap space this off-season, according to CapFriendly, but could have an additional $7.86 million to spend if Shea Weber lands on long-term injured reserve.

Penguins to lose a Key Forward?

Ryan S. Clark of The Athletic believes the Pittsburgh Penguins will have to choose between exposing veteran Jeff Carter or winger Kasperi Kapanen in the the Seattle Expansion Draft.

Clark believes the Penguins will opt to protect forward Teddy Blueger after signing him to a two-year extension this week. He adds that Sidney Crosby and Evgeni Malkin must be protected due to no-move clauses and expects Jake Guentzel, Jared McCann and Bryan Rust to also get protection, leaving just one forward spot left.

Kapanen was acquired last off-season from the Toronto Maple Leafs for a package that included a first-round pick. He had 11 goals and 30 points in 40 games during the regular season, adding one goal and three points in six playoff games. The 24-year-old is scheduled for restricted free agency next summer with one year at a $3.2 million cap hit left on his deal.

Carter, a two-time Stanley Cup champion with the Kings, was acquired from Los Angeles at the trade deadline this year for two draft picks. He had 17 goals and 30 goals in 54 games between the two teams and added four goals and five points in six playoff games. The 36-year-old carries a cap hit of just $2.636 million, with the Kings having retained half his salary in April's trade.

While the Penguins may be debating between the two players, Clark writes the Kraken could still have interest in Brandon Tanev or Jason Zucker in the expansion draft.

It's been a busy start to the off-season for the Edmonton Oilers, who signed Ryan Nugent-Hopkins to an eight-year deal and then acquired Duncan Keith from the Chicago Blackhawks.

The team, however, has more work to do with starting goaltender Mike Smith slated to hit unrestricted free agency on July 28.

TSN Hockey Insider Darren Dreger said Thursday the Oilers have held positive contract talks with Smith, but the 39-year-old will have suitors if he remains unsigned in two weeks.

"Speaking of goaltenders, the Edmonton Oilers continue to negotiate with veteran goaltender Mike Smith, I'm told that the talks are positive," Dreger said. "I think we can all understand how busy Ken Holland has been, starting with the Duncan Keith trade from the Chicago Blackhawks.

"I'm told that they're negotiating to get things done. It's a slow-moving process and I'm also told that if Mike Smith becomes an unrestricted free agent on July 28, despite the fact that his best years likely being behind him, there are clubs with interest, so the Oilers have some work to do."