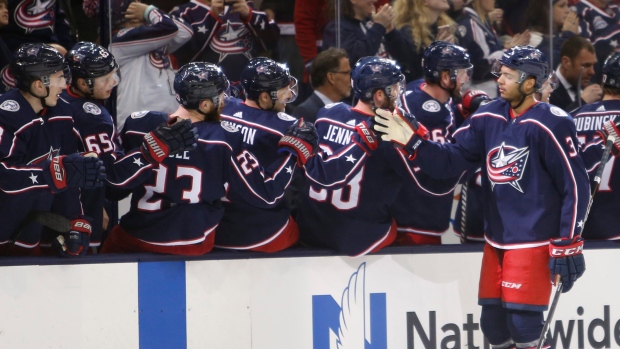 The Columbus Blue Jackets and defenceman Seth Jones could be headed for a split this off-season as the defenceman enters the final year of his contract, and Aaron Portzline of The Athletic reports four front-runners have emerged in the trade market.

According to Portzline, the Chicago Blackhawks, Colorado Avalanche, Los Angeles Kings and Philadelphia Flyers appear to be the most-likely candidates to land Jones, though also every NHL general manager has reached out to Columbus.

Jones, 26, had five goals and 28 points in 56 games with the Blue Jackets last season after posting six goals and 30 points in the same number of games the previous year.

Portzline believes the Blue Jackets' return for Jones will fall short of what the Ottawa Senators received for Erik Karlsson in 2018, but notes the price could be driven up if there's a bidding war between the interested teams.

Jones is signed at a cap hit of $5.4 million and currently scheduled to become an unrestricted free agent next summer.

The Vegas Golden Knights fell one round shy of the Stanley Cup Final for the second straight season this year after tying for the NHL lead in points during the regular season.

Team owner Bill Foley told the Las Vegas Review-Journal the team will focus on upgrading their power play after ranking last among all teams in the postseason with just a 9.3 per cent success rate with the man advantage.

“Obviously we really want to improve the power play. We’ve got to do better there,” Foley said. “That’s a problem we’ve had historically, really, is a power-play problem. I would guess you’re going to see a lot of work toward power-play improvement.”

The Golden Knights ranked 22nd in the league during the regular season on the power play with a 17.8 per success rate.

Vegas rotated between goalies Marc-Andre Fleury and Robin Lehner in their third-round series against the Montreal Canadiens face a decision on whether to keep both netminders next season.

Exempt from the expansion draft, the Golden Knights have Fleury under contract through next season, while Lehner has four years left on his current deal.

“That’s all going to be up for discussion when we start talking with the pro scouts in two weeks or so,” Foley said. “I like having our two goalies. They’re both skilled. They’re both great guys. Alternating two top goalies like that, really getting into a tandem situation, I believe really helps. But we’ll just have to see how things evolve over this next few weeks or so.”

With $12 million tied up in goaltending, the Golden Knights are projected to have just over $6 million in cap space this summer, per CapFriendly, with Alec Martinez, Mattias Janmark and Tomas Nosek slated for unrestricted free agency.

The Minnesota Wild are set to continue contracts talks with breakout star Kirill Kaprizov this week ahead of the winger reaching restricted free agency on July 28.

Wild general manager Bill Guerin told NHL.com over the weekend he believes the team will reach a deal with the reigning Calder Trophy winner.

The 24-year-old led all rookies this season with 27 goas and 51 points in 55 games with the Wild, having spent the previous six seasons in the KHL.

While Guerin has stated the Wild would like to reach a long-term deal, Kaprizov's camp is believed to be looking to keep the term shorter.

"You've got to understand the other side and where they're coming from," Guerin said. "They're trying to accomplish something and so are we. I think when there's maybe a bit of a disagreement, it just takes a little bit more time to come to a compromise.

"It's not just them not wanting to take what we're offering, it's us, too, and we have to see it that way. It takes two sides to make a deal, and it just could take a little bit longer."

The Wild, who lost in Game 7 of their first-round series with the Golden Knights, have just under $17 million in cap space this off-season, according to CapFriendly.