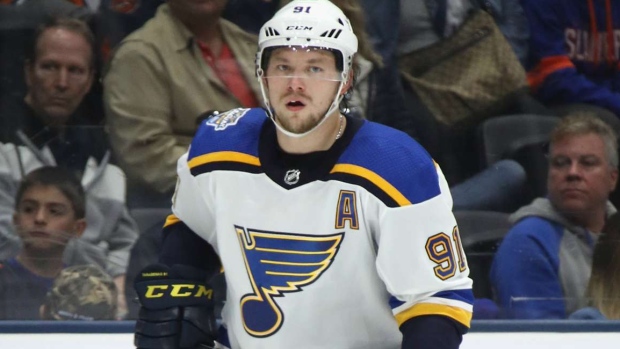 Last week, The Athletic reported forward Vladimir Tarasenko had asked for a trade out of St. Louis.

On Monday, Jeremy Rutherford and Corey Pronman wrote that while there are no guarantees general manager Doug Armstrong finds a suitor for the 29-year-old winger, a split appears to be where the situation is headed. Tarasenko has reportedly given the Blues a list that includes as many as 10 teams that he’d approve a trade to.

The Athletic notes finding a deal for Tarasenko could be tricky given his three shoulder surgeries and $7.5 million cap hit for two more years with a flat salary cap this next season.

Rutherford and Pronman explain that while it’s possible the Blues leave Tarasenko unprotected in the expansion draft and he becomes a member of the Seattle Kraken, general manager Ron Francis might not be so quick to bite.

“In addition to Tarasenko’s health history, there may be concerns about how his now-public rift with the Blues will be perceived by teams interested in him,” they wrote.

Washington Capitals forward T.J. Oshie told NBC Sports he had not had any discussions with the team about potentially being exposed to the Seattle Kraken next week in the expansion draft.

There has been some speculation of Oshie possibly being a target for the NHL’s newest franchise. The 34-year-old is signed for four more years at $5.75 million per season and is from nearby Everett, Wash. Kraken head coach Dave Hakstol also coached Oshie in college at the University of North Dakota.

However, the veteran forward made it clear Washington is where he wants to be.

"I'm a Capital," Oshie said. "That's where I'd like to be, that's where I'd like to stay. I will tell you this though, I think [Hakstol] does an amazing job at building culture and tradition and I can't think of a better guy to start with an organization from the ground up and really bring that culture and tradition to Seattle. He's so good at bringing teams together and making players play for each other."

"I feel pretty confident that I've proved to [management] that I should stay and hopefully they see that I'm valuable enough to protect me," Oshie said. "But these drafts are always hard because you lose teammates every season and that's always the toughest part to part ways and have to wish someone good luck somewhere else. I hope I'm staying, but it is a tough time seeing someone go.

This isn't the first time he's made clear his desire to stay, telling the Seattle Times in late May he views Washington as his long-term home.

Oshie has been a steady point producer during his six-year run in Washington, scoring 22 goals for 43 points in 53 games last season and helping the team win a Stanley Cup in 2018.

Red Wings poised to move up?

With the July 23 NHL Draft fast approaching, could we see a team make a move to try and vault up the draft board?

According to The Athletic’s Max Bultman, the Detroit Red Wings are well positioned to move up from their second first-round pick. Steve Yzerman and co. own two first-rounders with their selection at No. 6 and the Washington Capitals’ No. 22 acquired in the Anthony Mantha trade.

Bultman notes Detroit’s stockpile of early-round picks, the flat salary cap and unique scouting circumstances of the 2021 Draft could work in the Red Wings’ favour if they decide to move up. He adds Detroit could target a goaltending prospect next week and moving up closer to the middle of the first round could give them a shot at either Jesper Wallstedt or Sebastian Cossa.

“And the Red Wings, notably, have no netminders of their caliber currently in the pipeline,” Bultman writes.