With the New York Islanders completing their upset over the Boston Bruins on Wednesday night, the third round of the Stanley Cup Playoffs is starting to take shape. One interesting dynamic? Each series will be its own David-versus-Goliath matchup.

We already know that the Islanders will be squaring off against the Tampa Bay Lightning, and betting markets are pricing Tampa Bay to advance about 71 per cent of the time. Irrespective of what happens in the remaining second-round series between the Colorado Avalanche and Vegas Golden Knights, we should expect similar pricing when the winner faces the Montreal Canadiens in the other semifinal.

You won’t see me writing off the Islanders or Canadiens. Both teams are more than capable and have shown they can take care of opponents with top-end talent. But the reality is both will be facing a Stanley Cup favourite in the third round.

Historically speaking, I was curious how one-sided these matchups appear to be on paper in relation to how these teams finished in the regular season.

The table below shows third-round playoff matchups since the 2007-08 season, and the net-goal differentials (per 60 minutes; our measurement of relative team quality) separating the two teams. The Islanders and Lightning are not separated by much, some of that obviously stemming from Tampa Bay playing the regular season without key personnel.

As for the Canadiens, they are certain to be fighting an uphill battle regardless of which team they play: 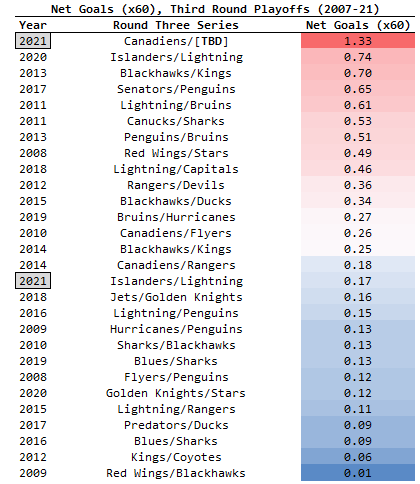 If you are Montreal, what you are trying to gauge is the feasibility of an upset this late in the postseason.

Consider an example from the 2008-09 season, where the Detroit Red Wings and Chicago Blackhawks – who both finished inside of the top-four in goal differential – squared off in the Western Conference final. The teams were impossible to separate in terms of talent; not dissimilar to what we are seeing in the second round between Colorado and Vegas.

There is some precedent for upsets at this stage of the postseason. The 2017-18 Washington Capitals, en route to their first Stanley Cup in the Alex Ovechkin era, had to get through a considerably better Tampa Bay Lightning team in the third round. The two teams were separated by 38 goals over the course of the regular season, yet it was the Capitals advancing in seven games.

And one series that wasn’t an upset, but was ultimately decided by a single goal in a Game 7, was the 2017 third-round series between the Pittsburgh Penguins and Ottawa Senators. Those Senators may have been the last bona fide Cinderella team, outscored by five goals in the regular season prior to their wild playoff turnaround.

As for the Lightning and Islanders, it’s not lost on me that these two teams met one season ago in what was at that point in time the most one-sided matchup by net goal differential. The Islanders put up an impressive fight, but dropped the series in six games.

This year, we saw compression between the two teams – the Islanders improving by 28 goals this season, the Lightning declining by 14. The absence of a player the calibre of Kucherov would explain Tampa Bay’s slip, but the Islanders are a definitively better team and should pose a real challenge.

Long story short? The Canadiens and Islanders are going to be fighting considerable uphill battles, but there aren’t many examples of teams fluking their way into the final four either. Montreal and New York are here because they have earned it, and both have defeated a perceived superior opponent once already.

Now, they are going to get their biggest tests yet.