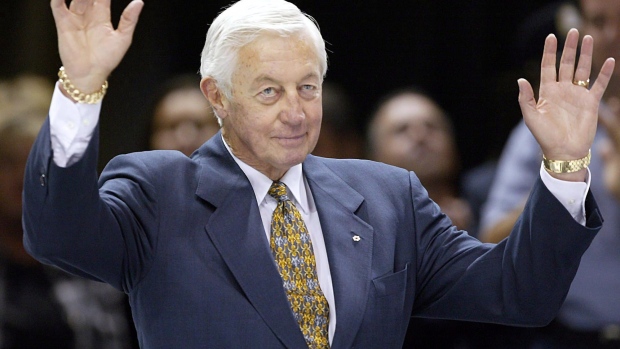 TORONTO — Montreal greats Jean Beliveau and Maurice Richard and Detroit legend Gordie Howe were among the Hall of Famers honoured by the NHL on Sunday as the league started unveiling a list of its 100 greatest players as part of its centennial season celebration.

The 33 players announced prior to the Centennial Classic between the Detroit Red Wings and Toronto Maple Leafs played primarily during the league's first 50 years (1917-1966).

"It's hard to come up with a 100 players because there's probably two or three hundred great players so for all the 100 guys who are on this list, it is pretty special," said Wayne Gretzky, the league's centennial ambassador. "Each and every guy that gets to play in the National Hockey League always feels honoured, but to be a part of this hundred, is really unique.

"I think each and every guy will be honoured and thrilled. It'll be something that's talked about for a long time 'cause there's a lot of great players, who could be part of that hundred."

Dave Keon, who spent 15 seasons with the Leafs, winning the rookie of the year award in 1961 and guiding Toronto to four Stanley Cups, highlighted 15 Maple Leafs announced.

Keon, the only Maple Leaf to ever win the Conn Smythe Trophy (1967) as post-season MVP, was also part of Toronto's "The One Hundred" list unveiled in October to commemorate the 100 greatest players to play for the Maple Leafs franchise in its first 100 years.

"It's going to take a few years for all of this to sink in," said Keon. "The last three months have been pretty overwhelming for me — October and this weekend. I'm thrilled that I was chosen and it's a great honour."

The remaining 67 players on the list of 100 Greatest NHL Players will be unveiled on Jan. 27 at NHL All-Star Weekend in Los Angeles.