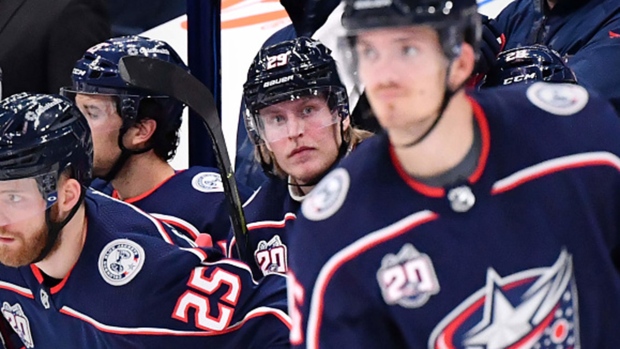 It's safe to say Patrik Laine is not on the trade block ahead of the March 21 deadline.

In an interview with TSN Hockey Insider Pierre LeBrun in The Athletic, Columbus Blue Jackets general manager Jarmo Kekalainen sounded off on trade rumours that have surrounded the 23-year-old pending restricted free agent.

“Yeah it bothers me because people make up s---, that’s what bothers me,’’ Kekalainen said. “I understand that sometimes from conversations you have (with teams) some of it may leak out, and a name gets in there, but this is not a case like that. This is just somebody making s--- up from their own speculation of what we might do. They make it up and hope for the headlines and hope for the clicks. I think that’s unethical. And I don’t have any time for it.’’

LeBrun writes that Columbus will try to work out a long-term deal with Laine this summer, but Kekalainen stressed the team is not under pressure to reach a deal immediately.

“I’ve said this before about Laine, we have no rush, we have his rights for this year and next year,’’ Kekalainen said. “When the time is right, we’re going to sit down and look at all the options together and see if we can come to a solution that he will stay for us for a term that fits the need of both sides and for the dollars that meet the needs of both sides.

“Let’s see if there’s a marriage that we can get into. And if not, you know, that’s hockey. I always say, every player that gets into the time frame when they can become (unrestricted) free agents, they can do that if they want to. And there’s not much we can do about it. The only thing we can do is sit down and talk about all the options and present what makes sense for us, listen to what makes sense for the other side and see if there’s a deal to be made.’’

As for the Blue Jackets' deadline plans, LeBrun believes the team will try to move pending unrestricted free agents Max Domi and Joonas Korpisalo, but doesn't expect any major roster reconstruction beyond that.

Columbus currently sits eight points back of the Washington Capitals for the final wild-card spot in Eastern Conference, with a game in hand.

With just under $7 million in cap space (per CapFriendly), the Seattle Kraken have let it be known they're willing to take on contracts to help broker deals ahead of the deadline.

Kraken general manager Ron Francis added, however, that the goal beyond this season will be to spend to the cap on their own, starting with free agency in July.

“Absolutely. We have the cap space and the owners are willing to spend the money,” Francis said, per The Athletic. “We’ve made that well known to all the GMs that if they need a third-party broker or there’s a deal with a contract they need to move and it makes sense, we’re open for business on that end as well. Our owners have said from day one, we have the green light to spend to the cap.

"So as we get into the free-agent market this summer, there’s always the risk you don’t get the guy you want or somebody else wants to play for someone whether (it’s) because he’s from that market originally or something else. Our plan is to certainly be aggressive again in free agency this summer.”

The Kraken, whose biggest free agent moves last year included signing goaltender Philipp Grubauer and forward Jaden Schwartz, are set to miss the playoffs in their inaugural season with a 17-34-5 record to date.

Francis confirmed that after a conversation with team captain Mark Giordano, the veteran defenceman is expected to be moved ahead of the deadline. As for the fate of other unrestricted free agents such as forwards Calle Jarnkrok and Marcus Johansson, Francis said the door for a return to the Kraken in the future would not be closed with deadline deal.

“Those will be discussions over the next few months. Some of it depends upon what teams call and ask for or what they’re willing to give you for them,” Francis said. “And (another) thing is maybe having that discussion (about) what they are looking for moving forward. There’s always the option of trading a guy and kinda sitting and waiting to see what happens in the summertime. There’s a lot of different scenarios that play out. But those guys have come and played hard for us each and every night and I appreciate what they are doing for us.”

Adding draft capital may be of importance this month for the Kraken, who currently have just one additional pick on top of their own selections in this year's draft - a fourth-round pick from the Calgary Flames.

Not in the market?

There are five goaltenders listed on the TSN Trade Bait board, but it appears there may not be as many interested buyers as previously thought when it comes to the position.

TSN Hockey Insider Chris Johnston said Wednesday the New Jersey Devils are looking to acquire a goaltender to help beyond this season, while the Washington Capitals and Vegas Golden Knights have been putting out feelers among contenders.

Johnston adds, however, that the Edmonton Oilers and Toronto Maple Leafs do not currently appear to be in the mix to acquire a goaltender at the deadline.

New York Rangers backup Alexandar Georgiev leads the list of netminders on the Trade Bait board, checking in at No. 8, followed by Braden Holtby (No. 19),  Ilya Samsonov (No. 26), Marc-Andre Fleury (No. 27) and Korpisalo (No. 41).

What do you want to see your team do ahead of the deadline? 🤔👇