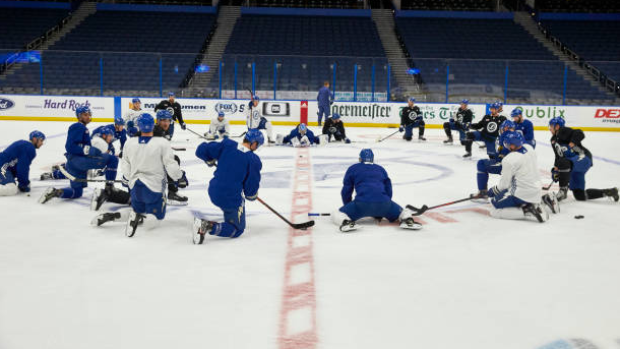 This story has been amended since its original publication to add NHL and NHLPA testing protocols for players and staff before they travel from U.S. cities to Canadian hub cities in Toronto and Edmonton for July 26.

“This is unwise, it’s bad judgement, it’s a horrific decision,” Dr. Swartzberg, a physician and researcher at the UC Berkeley School of Public Health in California, said in an interview with TSN.

Dr. Swartzberg is among seven infectious disease experts who told TSN in separate phone interviews this week that they disagree with the joint league-union decision to have training camps in cities such as Tampa, Sunrise, Fla., Phoenix, Las Vegas, and Dallas - at a time when the coronavirus is pinballing throughout the region.

Florida has averaged 11,119 new Covid cases per day over the past week, the fastest rate of growth in the U.S. Texas is close behind, averaging 9,079 new daily cases. In Dallas, the county medical examiner’s office has run out of room to place dead bodies awaiting autopsies.

Dr. Michael Silverman, a London, Ont., infectious disease specialist, said it was "crazy" and "reckless" for the NHL to stage training camps in states where infection rates are rising so rapidly. Dr. Jeffrey Kwong, an epidemiologist from the Dalla Lama School of Public Health in Toronto, called the NHL decision “mindboggling.”

The number of documented Covid cases is rising in 41 U.S. states.

Dr. Sumon Chakrabarti, an infectious disease specialist at Trillium Health Partners in Mississauga, Ont., said he would advise the NHL against having training camps anywhere in the U.S. right now.

“Community transmission is an important metric for Covid and right now in the U.S., it’s nuclear, it’s gargantuan especially in Florida,” Dr. Chakrabarti said. “Having training camps in the U.S. is a terrible non-evidence-based decision. I’m sure players will be wearing masks and washing hands but it’s like having a small umbrella outside. In the light rain it works well and you’re ok. But if you start getting winds and torrential rains, that umbrella isn’t going to do anything for you. Even in a ‘bubble’ you’re in a bucket of Covid ... You want to be charitable and maybe the NHL is so far into this that it’s just hard for them to pull back. But you look at this and say, ‘What are you thinking?’”

The NHL began Phase 3 of its return to play on Monday, with players reporting to training camps across North America. Players can choose to opt out of playing in the 24-team playoff tournament scheduled to begin on Aug. 1 in Toronto and Edmonton.

Those players who left their NHL home cities during the pause have returned via commercial flights. It's unclear how many players have remained in their NHL cities since the NHL shut down on March 12.

“Just the travel means they’re going through at least two airports and an airplane in the midst of a global pandemic,” said Dr. Swartzberg, who opened an AIDS clinic in San Francisco in the mid 1980s and has spent 45 years treating infectious diseases. “In America we have 25 percent of the world’s cases and only 4 percent of the world’s population. The risks just from traveling here are huge. Wearing a mask and washing your hands mitigates your risk, but it definitely doesn’t eliminate it.”

During Phase 3, NHL players are staying in their own homes in their NHL cities. They are not in quarantine, although the NHL has offered to help with grocery shopping and delivery to help limit contact between players and their families and others in the community. Several NHL player agents said they have urged their clients to ask their wives and children to stay at home, and not go to places like coffee shops, grocery stores or on play dates.

The NHL has not reported results of Covid tests for players since Phase 3 began on Monday. Doctors say that people with the virus typically test positive five to seven days after they are first infected and tend to be infectious at least a few days before their first positive test. During Phase 2, 30 of the 600-plus players who attended voluntary on-ice training in their NHL cities tested positive for Covid. The NHL on Monday said it was aware of a further 13 players who had tested positive during Phase 2.

While provincial and state governments in Canada and the U.S. are updating Covid numbers on a daily basis, the NHL has said only that it will provide “regular updates” on the results of its Covid tests. The league and NHLPA have agreed not to identify players who have the virus or the teams that have players with positive cases.

“The NHL is putting so many people at risk, including players, coaches and trainers, some of whom are older, and other people,” Dr. Swartzberg said. “The other part of this that disappoints me is sports figures are revered. They are held up as symbols of our society and when this happens, when [professional sports leagues] behave badly, and with poor judgment, it gives license to people to do the same.”

The NHL did not respond to a request for comment.

Dr. Isaac Bogoch, an infectious disease specialist in Toronto who is advising the NHLPA, said in an interview on Monday with TSN that the risks to players remain low if they practice social distancing, wear a mask and wash their hands.

“There’s uncertainty at every step with this,” Dr. Bogoch. Said. “All the protocols do is reduce the risk, but in the pre-vaccine era, there’s no place on earth that’s going to be risk free.”

Dr. Bogoch said it might have been safer to hold training camps in Toronto and Edmonton, in the “bubbles” planned for Stage 4, but players didn’t want to do that because it would have meant another several weeks away from their families and homes.

“It’s true that in Florida, Arizona, Texas and Southern California that there’s a high burden of infection right now, but remember we still have this virus in Canada with several hundred new cases each day,” he said. “That means people can’t be comfortable or cavalier anywhere.”

Dr. Prabhat Jha, an epidemiologist at the University of Toronto and director of the Centre for Global Health Research at St. Michael's Hospital, said it was “crazy” to hold training camps in communities in the southern U.S.

“There is so much uncontrolled community transmission that it’s almost impossible to think you could protect the players from getting the infection and bringing it here to Canada,” Dr. Jha said.

According to the NHL-NHLPA protocols for return to play, players and team staff need three negative Covid tests 48 hours apart in the seven days prior to flying to Canadian hub cities for Phase 4.

Infectious disease doctors say there have been some cases where patients with Covid have not tested positive for the virus for more than a week after being infected. Many patients, doctors say, are infectious for at least several days before registering a positive test.