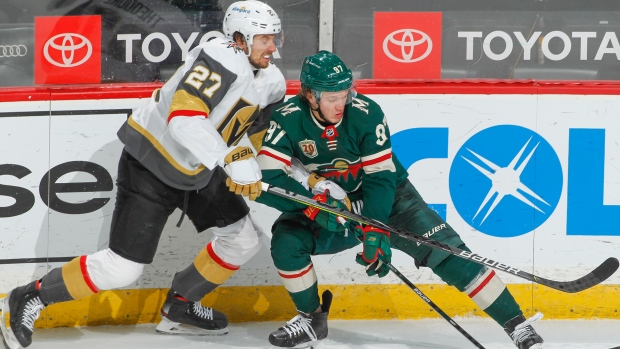 The Vegas Golden Knights have set a new standard for the expansion team in professional sports, enjoying a remarkable amount of success over just four NHL seasons.

They reached the Stanley Cup finals in their first year and advanced to the Western Conference finals after the pandemic pause last season. Their 40 wins this year were the most in the league. They've never missed the playoffs. Their all-time record, sample size notwithstanding, is the best of the NHL's 31 franchises.

The Minnesota Wild haven't played along. Their 11-2-3 overall record against Vegas, including 6-0-2 at home, is by far the best of any opponent of the Golden Knights.

“We know that we’ve outplayed them a lot of times this season,” Wild center Joel Eriksson Ek said, “and I think we know how to play them to be successful.”

They're about to meet in the postseason for the first time, with Game 1 on Sunday afternoon on the Las Vegas Strip.

“We’ve had good rounds and bad rounds, and we know what to expect. We have a lot of playoff experience as a group. Obviously, we’re not going to have an easy path if we want to go all the way, but we have the gamers in that locker room and I’m pretty confident that we could go a long way here,” Golden Knights forward Jonathan Marchessault said.

Vegas tied Colorado for the most points in the league in this abbreviated season, losing the Presidents' Trophy to the Avalanche on the regulation wins tiebreaker, but the second-best record in the league didn't exactly buy the Golden Knights a break. The Wild went 5-1-2 against them this season, though the Golden Knights had a 28-24 edge in scoring.

Six of the eight games were decided by one goal, and the most recent of these mostly thrilling matchups on May 5 also included the rough stuff on top of the scoring action with 30 penalty minutes doled out in the first period.

“It’s always been back and forth and physical and heavy. So it suits us well," Wild forward Marcus Foligno said. "They’re a great team. We’re a great team. So it’s going to be a fun series.”

The Golden Knights allowed the fewest goals (124) in the league this season, giving Marc-Andre Fleury and Robin Lehner their share of the William M. Jennings Trophy. Fleury had the second-best save percentage (.928) among goalies with more than 25 games played, a sparkling season during which he moved into third place on the NHL's all-time wins list.

“For me, they're hands down the best goalie tandem in the league,” Golden Knights coach Peter DeBoer said. “I like to think that trophy — and I’m sure they would say this also — is a team defense trophy. I think they got some good help from our commitment to defending, but those two were outstanding every night for us.”

Kirill Kaprizov led the Wild with 27 goals, giving Minnesota the consensus favorite for the Calder Trophy after his long-awaited arrival from Russia. He scored six times against the Golden Knights, twice in that playoff-style-intense game on May 5 in Minnesota that Vegas won in overtime.

“I don't think we can get overly hung up on one player. We just want to focus on ourselves and make sure we're defending hard,” said Golden Knights defenseman Nicolas Hague, whose hard hit to Kaprizov's back next to the benches triggered a series of scrums between the two sides on May 5.

The Wild haven't won a series in the playoffs since 2015, with less know-how to lean on than the Golden Knights, whose core from the 2018 runner-up team largely remains intact. The new acquisitions for Minnesota this season ought to be a big help, though, with goalie Cam Talbot, forward Nick Bonino and defenseman Ian Cole all bringing significant postseason experience.

Bonino and Cole both won championships with Pittsburgh in 2016 and 2017.

“Those guys have been fantastic,” general manager Bill Guerin said. “Along with their Stanley Cup experience and all the things that they bring, they’re good people. They’re culture guys.”

The Golden Knights finished strong at 15-3 with 11 regulation wins over their last 18 games, but they'd prefer to be healthier. Forwards Max Pacioretty and Tomas Nosek and defenseman Alec Martinez have all been sidelined lately due to injuries with no guarantee they'll be ready to start the series. Pacioretty's absence has loomed the largest, with his team-leading 24 goals in 48 games.

“It's not an easy thing to take out of our lineup. Obviously, we want him in there. We need him in there, but we have some guys who can step up,” said linemate Mark Stone, who led the Golden Knights with 61 points.