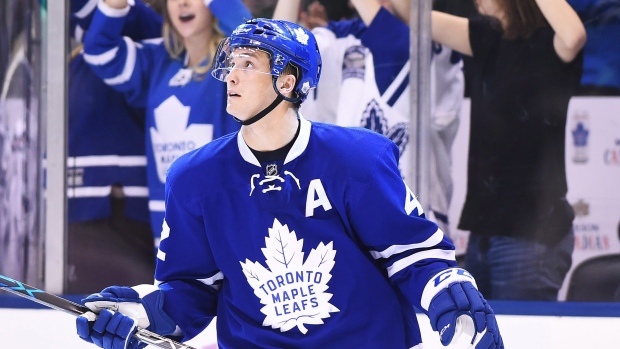 Forward Tyler Bozak (lower body) will not play in Monday's game against the Anaheim Ducks. Forward Ben Smith (upper body) is also not in the lineup.

The Toronto Maple Leafs announced they have recalled forward Frederik Gauthier from the Toronto Marlies (AHL) and placed defenceman Martin Marincin on the injured reserved list with a lower body injury.

After originally expecting to return to the Nashville Predators' lineup for their two-game road trip, P.K. Subban (upper body) did not make the trip. Subban missed Saturday's game against the New York Rangers. The all-star defenceman is listed as day-to-day. - The Tennessean

According to TSN's John Lu, defenceman Andrei Markov (lower body injury) is considered day-to-day and his status is questionable for Tuesday's game against the Anaheim Ducks. There is no change in the status of forward Andrew Shaw (concussion-like symptoms) and Lu reports that according to head coach Michel Therrien, Alex Galchenyuk (knee), David Desharnais (knee) and Greg Pateryn (foot) are all on target in their six to eight week recovery times.

Defenceman Mike Green (undisclosed) is out for Monday's game against the Carolina Hurricanes. Green suffered the injury in Saturday's game against the Anaheim Ducks and the team called up Nick Jensen to replace the 31-year-old. The Red Wings also placed Alexey Marchenko (shoulder) on injured reserve.

Goaltender Jimmy Howard will be in net for the Red Wings against the Hurricanes on Monday.

Goaltender John Gibson will be in net on Monday aganist the Maple Leafs.

John Gibson starts in goal tonight for the Ducks vs the Leafs.

Backup goaltender Carter Hutton will start for the Blues against the Edmonton Oilers on Monday night.

Goaltender Corey Crawford could make his return between the pipes on Friday night against the Colarado Avalanche. Crawford has been out since Dec. 3 when he had to have an emergency appendectomy. - NHL.com