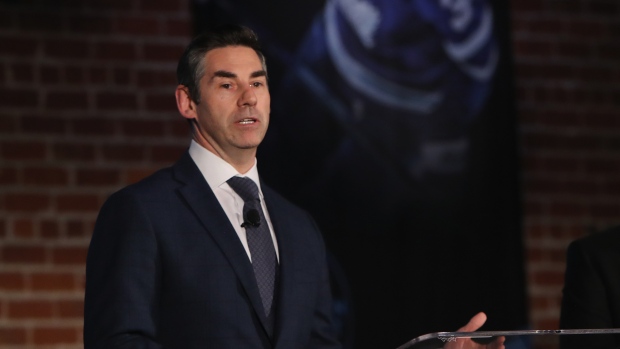 While the participation of National Hockey League players at the 2022 Beijing Olympics is still far from a certainty, NHLPA executive Mathieu Schneider called last week's meeting with the International Olympic Committee "really positive" as all vested parties look for a way forward.

“I’m not sure if I would say it surprised us, but we were happy with the meeting, there’s no question about it," Schneider told TSN Hockey Insider Pierre LeBrun in The Athletic. "It was a really positive meeting. It was a really good gesture on the IOC’s part.’’

The meeting that took place last Tuesday in New York City was attended by members of the NHLPA, IOC, IIHF and NHL. The major talking point coming from the meeting was the IOC's willingness to cover the players' costs - insurance, travel, etc. - for participation, something that they refused prior to the 2018 Games in Pyeongchang, a major stumbling block that helped lead to the NHL not participating at the Olympics for the first time since Lillehammer in 1994.

“Yes, certainly on all the costs, the other big issue is us being able to promote the fact that our guys are over there,’’ Schneider said. “And that’s something else that we’re going to work towards addressing and the IOC has signaled that they’re open to it. I think the word that they used several times was forming a true `partnership’ amongst the NHL players and the IOC; which is music to our ears."

“I would say from the international perspective, a positive meeting because they heard and seemed willing to address some of our major concerns,’’ Daly told LeBrun. “From an overall perspective, I would say we have a long way to go. I wouldn’t get overly excited.’’

With the Beijing Games set for February of 2022, they fall within the current CBA that is scheduled to expire in June of 2022, meaning that the league could seek some kind of concession from the players in any new CBA talks in exchange for participation.

But Schneider points to the value proposition for the league in having its best players on display in what is still a largely untapped potential market in Asia, one of the major reasons why the NHL ran exhibition games in China in both 2017 and 2018 - something that the PA was willing to sign off on.

“Listen, we all know it’s going to benefit the owners long term," Schneider said. "They’re going to be owners for a long time. They get the benefits from the potential revenue generated towards franchise value, etc., so yeah, I would say that we could have possibly held up not going over to the China (exhibition games) and say `we have to be part of the Olympics.’ But players didn’t want to do that. They understand this is a gesture and it’s good faith going over there. Obviously, our guys are playing the greatest game on earth and want to spread that.’’

The NHL and NHLPA are expected to meet later Monday in Toronto ahead of CBA expansion talks on Tuesday.