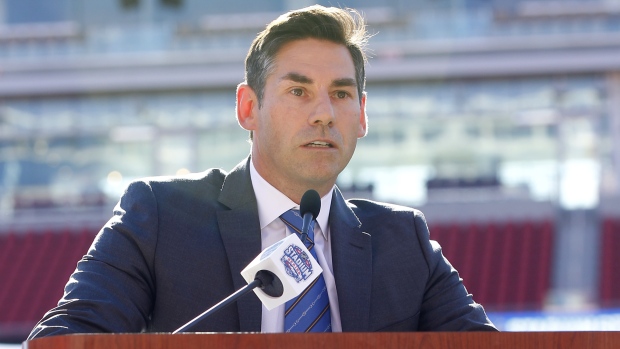 The National Hockey League Players' Association is finalizing plans on a watershed program to help current players return to school and prepare them for a multitude of issues they will face in transitioning from playing careers to retirement.

The program was conceived several years ago and will be unveiled at a time when the union is facing criticism from both current and former players about whether more can be done to help players cope with the stress of leaving hockey.

In April - two months after former Chicago Blackhawk Steve Montador was found dead in his home at age 35 - his one-time teammate Daniel Carcillo said in an online video that the NHLPA hasn't done enough to help its members move on with life. NHLPA executive Mathieu Schneider said that criticism is deserved, adding that a new program may mark a turning point.

TSN has learned that for the past two years, Schneider and his colleagues have been quietly researching professional sports leagues around the world, consulting with sports industry executives as far away as in New Zealand about programs that help active professional athletes improve levels of education and prepare for post-playing careers.

The personal development program will see players receive counseling about personal relationships and parenting, and be given the opportunity to shadow executives in industries such as finance.

The NHL and NHLPA have each pledged close to $1.5 million over the next three years to the pilot project, though it's unclear how much of the collective $3 million will go to pay for tuition and other fees at colleges, universities and trade schools.

The NHLPA hopes to begin the ambitious program this fall with at least 60 active players, two from each NHL club. The union envisions players using their downtime, like the many hours spent in hotel rooms between games, to study for online or correspondence courses.

In time, the NHLPA wants to expand the program to include retired NHL players.

"What we are trying to do is create a program that would encourage guys to go back to school and take courses during the year, whether it's high school that they haven't finished, or college courses," said Schneider, adding that players spend parts of nine months every year on the road. "Guys aren't given the tools.

"From the time they are 13, 14, 15 years old, their sport defines them and it becomes their entire life. It becomes, 'You have to focus on your sport until you retire and make the most of it.' That mentality is starting to change. There's a real recognition it makes players better while they are playing if they have a well-rounded life."

The program comes as the league and union face unprecedented pressure to help players during their post-playing days. In recent years, there's been a flurry of high-profile cases of players who have fallen into depression after leaving the NHL.

In a video posted on The Players Tribune website, Carcillo, a 30-year-old forward with the Chicago Blackhawks, said he has asked former players what they know about the NHLPA's so-called exit program. "Not one knew what it was," he said. "Right now, as far as the PA goes, we would receive a phone call to see how we're doing and that's pretty much our exit program.

"From the guys that I've talked to who have moved on, they've all said the same thing. All fell into a deep depression and went away quietly. It was almost as if the less noise you make when you go away, the better. I don't think it's right. It doesn't feel right for how much we give to this league and this sport. Sacrificing our bodies, sacrificing our minds with the concussions and the hits that we take."

"Up until now we haven't figured out how to help those guys, no question about it," he said. "In the past, programs have been thrown together in a way that hasn't necessarily used the funds in the most efficient way possible. We're trying to make the most of the funds we have right now."

Schneider played in the NHL from 1987 to 2010 with the Montreal Canadiens and eight other NHL teams. He said one of the reasons he pushed so hard to develop a back-to-school program is because as a member of the emergency assistance fund - a fund co-managed by the NHL and NHLPA that gives cash stipends to players who have hit hard times - he's seen players hit poverty not long after making their millions.

The Boston Globe reported in 2014 that as many as 100 former NHL players, coaches, trainers and widows in need receive assistance from the emergency fund at any given time. The fund distributes about $2 million per year.

"I have actually recused myself of being part of decision-making process (of awarding cash assistance) because cases are too close to me - ex-teammates and friends," Schneider said, adding that the transition to retirement is unwieldy. "If you were to tell a lawyer or a doctor that he had to stop practicing at 40 years old and figure out what he's going to do with his life after that, he'd look at you like you have three heads. That's essentially what athletes deal with.

"The reality is the average career spans three to five years, and the taxman comes and takes half of that right off the bat. Your agent takes his share and you have to live."

Then seemilngly in an instant, a player's NHL career is over.

"For years, the wives are in charge of the families, making domestic decisions when it comes to schooling and a player retires," Schneider continued. "He's not on the road, not working, trying to find purpose in his life.

"He and his wife have a completely different relationship from what it might be during past 10-15 years. It's basically a new marriage...you wake up and you're not sure what you're going to do with your day. There's only so many coffees and lunches you can do with your wife."

To be sure, not every current NHL player needs a personal development program, and some won't stick with it. Former players such as Ken Dryden and Stu Grimson obtained their law degrees while playing in the NHL. Paul Holmgren attended business school. And more recently, players such as Boston Bruins defenceman Torey Krug have enrolled in university courses.

"There are cases of guys doing this on their own, and a guy like Krug isn't a guy you're developing this for," Schneider said. "It's the guys who have no idea what they want to do."

TSN Hockey analyst Ray Ferraro, who played 18 seasons in the NHL with six teams, said the NHLPA's program is admirable but faces hurdles, as most of the players who enroll would probably abandon it after a few lessons. "There really isn't as much downtime as people think," he explained. "You get into a city at 4pm, go for dinner, have a bit of downtime and go to bed. The next day is a game day and nothing but hockey is happening then. It sounds like a well-conceived idea but they'll have to give players guidance on how to manage their time.

The NHLPA, with the help of former Vancouver Canucks scout Duncan Fletcher and Toronto-based headhunter and career management consultant John Hierlihy, began researching a personal development program in 2013 with a survey posted on its players-only website. Ninety-two players took part in that survey and another 29 players were interviewed in person or over the phone.

"One piece around networking we discovered that was fascinating was that the guys who are already doing it are creating a protective effect for themselves, reducing stress, and they are less worried about being traded or losing their jobs," Fletcher explained to TSN. "The trick is to get guys out of the hockey bubble."

Fletcher added that some players also expressed interest in becoming fire fighters or police officers when they leave hockey, while a small minority said they were interested in learning a trade such as carpentry. "Networking is key for players to do now," said Hierlihy. "Guys have the chance to leverage opportunities while they still have the jersey on their back."

In other words, an active player has a certain cache in networking that diminishes the moment he becomes a retired player. Schneider, along with NHLPA colleagues Rob Zamuner and Richard Smit, took survey results and worked with ex-NHLers Mike Komisarek and Mike Mottau to refine what a program might entail. Komisarek's advice was sought because he re-enrolled at the University of Michigan when he was an active NHL player, while Mottau mentored with a friend on Wall Street.

NHLPA executives have already discussed their plans with officials at the Swedish Hockey Union and plan to begin talks this summer with prospective post-secondary colleges and universities. Schneider hopes the program eventually becomes available to all NHL alumni. "My hope is we get so big right away we go back and get more funding," he said.

Former Chicago Blackhawk Steve Ludzik is pleased the Players' Association is making plans to help prepare players for their lives after the NHL. And he says he knows of hundreds of former NHL players who are living hand to mouth. "I know guys who are living in trailer homes or tents," he said. "There are too many guys who you once were cheering for on Saturday nights who are now looking for something to eat,"

Ludzik is starting up a new charity called 'Players Helping Players' that will commit money raised from player appearances and autograph signings to help former NHL players who have fallen on hard times. Ludzik is also negotiating with developers in the Niagara Falls region to build a retirement home in Chippawa, ON, that might accommodate about 50 former NHL players who need a place to stay. Ludzik said corporate sponsors are lining up to help pay for a facility.

"Too many NHL players leave the game with a pool hall diploma and that's it," Ludzik said. "That was an issue Steve Montador struggled with. I think it's a great idea to help current NHL players improve their education."